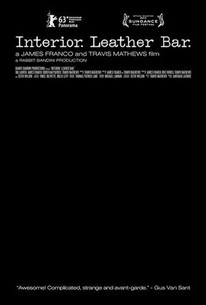 In order to avoid an X rating, 40 minutes of gay S&M footage was rumored to be cut and destroyed from the 1980 film, "Cruising." Inspired by the mythology of this controversial film, filmmakers James Franco and Travis Mathews collaborate to imagine their own lost footage. Amid the backdrop of a frenzied film set, actor Val Lauren reluctantly agrees to take the lead in the film. Val is repeatedly forced to negotiate his boundaries during scenes on and "off camera," as unsimulated gay sex happens around him. The film itself is constructed as a play with boundaries remaining queer in subject and form. As much a film about filmmaking as it is about an exploration of sexual and creative freedom, "Interior. Leather Bar." defies easy categorization.(c) Official Site

Mathews and Franco's collaboration is notable for an almost complete absence of the homophobia in which Cruising is saturated.

A movie that continually puzzles over what it is and why it is being made.

"Interior. Leather Bar." is a Rubik's Cube of a movie, an intriguing, layered puzzle that isn't easily solved.

We see brief, graphic shots of naked actors performing sexual acts. But it's the conversations about what those depictions represent that truly provoke.

It largely consists of Franco musing about depictions of homosexual activity on film.

The vagueness feels like a term paper you have to grade.

[Travis] Matthews made a sophisticated bit of sexual time-travel that allowed Franco to create another bit of self-reflection.

Has to be one of the most excitingly experimental queer cinematic projects of recent memory.

A film about boundries. About how we life the censorship. About how we do not want to see in a film but we must. A good audiovisual exercise. [Full review in Spanish]

Disappointingly, the entire project possesses little actual merit as a whole, hindered greatly by a contrived arc with minimal persuasive gumption and desire to properly inform.

Joylessly over-enunciates all of its questions in bluntly literal ways.

A very curious attempt by James Franco to create an omitted scene from the film "Cruising". It is short, confusing and without much sense as to why the scene really needed to be shot.

The film started off with the promise of being the reimaging of the lost scenes of the Al Pacino movie, "Cruising". Then it some how turned into a hot mess of a lot of nothing. I was as confused as Val most of the time. I understand what Franco was saying when he spoke about believing that we are brought up in a box and nurtured to believe that only a certain way of loving, living, and expressing yourself sexually is to be between a woman and a man. I liked that he pushed for a more out of the box kind of documentary, but it all just got so messed up along the way. And the Dom guy was super creepy, IMO. It's not something I would watch again. But not because of the content, but because of the confused mess it is.

Not at all what I expected. The film is not so much about the seedy material that might have been cut from the original Cruising film -- it's more about contemporary reactions to the material and challenging modern society's value judgments about sexuality. Thought provoking. I recommend this film for an audience with adult attitudes and open minds.