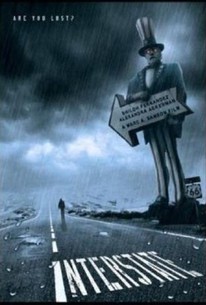 A trip from Montreal to Los Angeles takes a bad turn when a DJ attempting to reach his girlfriend involuntarily ingests drugs and becomes stranded at a dilapidated roadside motel in this hallucinogenic, neo noir road thriller from director Marc-Andre Samson. Edgar is a Montreal-based DJ whose girlfriend has landed an audition for a Hollywood sitcom. But Edgar can't join her on the journey, and in order to support her, the devoted boyfriend will have to hitchhike his way to Hollywood. En route, Edgar meets up with mysterious hitchhikers Veronica and Gloria. While at first the trip seems to be going fairly well, Edgar's situation turns quickly grim after he accidentally ingests drugs and proves unable to escape from a seedy interstate motel.

There are no critic reviews yet for Interstate. Keep checking Rotten Tomatoes for updates!

There are no featured audience reviews yet. Click the link below to see what others say about Interstate!