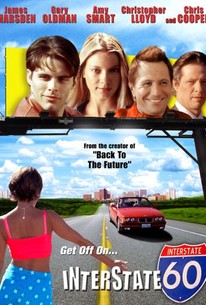 At the beginning of Interstate 60, Neal Oliver (James Mardsen) has more questions about his future than answers. Though he would rather pursue a career in art, Neal debates whether or not he should set his goals towards a law degree, as his father would greatly prefer. He has a girlfriend, but he wonders if he should search for the mysterious woman (Amy Smart) who visits his nightly dreams and inspires his artwork. By the time his 23rd birthday roles around, Neal is no closer to choosing his life's path. He feels empty and unsatisfied, despite lavish birthday gifts, and wishes only for clarity as he blows out the candles on his cake. Rather than instant answers, Neal is given the opportunity to take a journey on a highway that doesn't exist on any map; a highway where the past, present, and future converge. Alongside him is One Wish Grant (Gary Oldman), the immortal offspring of a leprechaun and Cheyenne Indian, who has the unique ability to grant wishes to those he believes deserve them. Thus begins Neal's surreal road trip through the uncharted territories of his own potential destiny. Interstate 60 features a stellar cast with supporting performances and cameos from Kurt Russell, Michael J. Fox, Liv Tyler, and Christopher Lloyd. Bob Gale, co-writer/producer of Used Cars, I Wanna Hold Your Hand, and, most notably, the Back to the Future trilogy, directs.

Michael Rhoades
as Kirby
View All

I couldn't help but think this would've made a pretty darn good TV show.

Cast: James Marsden, Gary Oldman, Chris Cooper, Amy Smart, Ann-Margret, Christopher Lloyd, Jane Moffat, Amy Jo Johnson, Michael J. Fox, Mark Lutz, Kurt Russell Director: Bob Gale Summary: In this highly unusual road flick, a man (James Marsden) in search of answers to life's great mysteries takes his quest on Interstate 60, a make-believe freeway that leads him to encounters with a motley group of strange characters living in surreal roadside towns. My Thoughts: "Not at all what I was expecting, which was a brainless roadtrip flick. Instead I got an thought provoking, mind bending, smart film. Completely the opposite of my first impression of the film. Guess the poster of a film can be very misleading. Anyways, this film has a really great mix of characters. There are many cameo's in this film by really great stars like Michael J. Fox, Gary Oldman, and Christopher Lloyd. A few others as well. Definitely see this film. It was a lot of fun."

Cute movie that feel like a combination of an after-school special and a Lifetime movie. I felt at times it had some new age message that my old aged brain was missing. Whimsical and enjoyable, but nothing to cry over if you have to wait to see it.

So good! It was a philosophical ride that didn't try to be too deep, instead it took a fun adventurous approach to it which I enjoyed. And you gotta love the back the the future cameos.