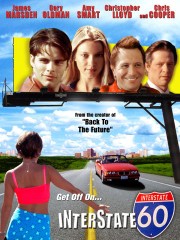 Luke C
August 6, 2018
My favorite movie of all time, creative, honest, to the point. Interstate is so much more than a road trip movie

Asma S
February 11, 2018
Amazing gem! Re-watched years later and it totally holds up. Might like it more as a grown up than I did as a teenager! With some amazing cameos and a young and deliciously good looking James Marsden! Highly recommended.

Daniel F
November 25, 2017
Found this movie at a tiny video store and bought it the next day, this is an excellent writing a superb cast its a great hidden gems you will tell all your friends about

Karoly P
November 7, 2017
An entertaining movie with hilarious satirical episodes which offer not-so-covert criticism of certain aspects of American life and society. But on the whole, it doesn't want to be more than an entertaining modern fairy tale, where everything ends well as a decent American story should, with the boy eventually finding his own vocation and his dreamgirl,

Super Reviewer
Todd S
June 14, 2017
Interstate 60 is one very strange but one very cool movie, that features a man searching for the great mysteries of life on a road that doesn't exist on any map. On Interstate 60, your wildest dreams or worst nightmares can come true, so you have to be careful where you get off. You might find yourself in a town that's full of insane laws, where everyone is a lawyer. On the other hand, you might find yourself in a town dedicated to partying, where every resident is high on drugs 24/7. There are strange drifters, weird road side attractions, and caught in the middle of everything is Neal Oliver (James Marsden), who isn't sure why he's there. At first, I just thought this film was weird and over my head, but as time went by, I started to see the genius of it. How it shows us that taken to the extreme, what we really want isn't what we want at all, and that most of us don't really know what the hell we want. James Marsden is the star and he is fantastic, paired with a non-stop flow of cameos everywhere he stops. This virtually unknown film has appearances by Michael J. Fox, Ann-Margert, Christopher Lloyd, Kurt Russell, and the list goes on and on. How they got all these guys to appear in a direct to video feature is beyond me, but take it from me, this isn't your typical b-movie. This film is one of the most unique stories you will ever see and even if you don't fully understand everything that's happening, you'll keep watching simply to see who and what comes next.

Bob M
June 4, 2017
Perhaps the best film I have ever seen - not to mention that James Marsden is some serious eye candy.

?????? ?
May 31, 2017
Underrated masterpiece. The perfect treat that gives food for thought to the layman liberal snob.

Federico F
½ December 28, 2016
Metaphorical and inspiring, based on the strengths of life points, by the growth of man to the passage to adulthood, all'accetazione itself, enjoyable scenes created by a good cast

Judi F
September 23, 2016
Crazy movie! So good it sticks in your head. Defies any category. Thinking people will agree; non-thinkers will get a kick out of it in some parts too!

Super Reviewer
Jesse O
January 26, 2016
This is a movie that I enjoyed more than the rating would imply. It's actually a fairly underrated little movie that has gone, largely, forgotten. Yet, at the same time, there's something about the film that makes it so that I don't think the film is better than just the 3 stars that it gets. Just don't know why. The film, very much, is structured like a series of skits on Neal's road trip as he searches for an answer. But I didn't actually have much of a problem with that skit-like structure. I think it actually is to the benefit of the film and what O.W Grant is trying to get Neal to accomplish, trying to think about the box and trying to put an end to preconceived notions of how things should be. Perhaps it's just the fact that the movie just doesn't have a lot of depth, it's fairly straightforward and simple to follow. Neal's looking for an answer to what he wants his life to be and not what his father wants it to be. So the film, again, it's about Neal's search for answers and all the people he meets on the way to getting them. Like I said, the film is like a series of skits, but, as opposed to when I use this comparison in shitty raunchy comedies, at least in this movies, the skits are really entertaining. Plus, again, it all serves to help Neal find out who he really is as a person. The best of all these skits would have to be the one where the entire town is comprised of lawyers who constantly sue each other for frivolous reasons. It sounds silly, and it is, but it's well-written and it leads to some funny moments. The acting is more than solid, it would almost have to be when you have people like Gary Oldman and Christopher Lloyd in your cast. James Marsden is always likable and that's no different here. He gives off a vibe, at least in this movie, of an everyman, despite coming from a family that's very well off. It's easy to relate to this character. The film has a really strong supporting cast, I already mentioned Gary, who is literally a troll in this movie, and Christopher, but you also have Chris Cooper doing a great job as a man who disapproves of lying to the point that he threatens to blow himself, and everybody else, up if they don't admit to the truth. This leads to the some of the funniest moments in the film when Bob, Chris' character, is called as a character witness for Neal's trial for running over a cat that he didn't actually run over. There are some romantic aspects to the film, but I don't think that James Marsden and Amy Smart had much chemistry. Like there was no spark between them. Which is a problem when Neal's entire journey is searching for this girl that he keeps seeing on billboards leading him to her. Though, to be fair, they didn't have much screen time together. But the time they did have, they just didn't show anything. Amy Smart is good as well, but, again, there's not much spark or life to her romance with James' character. The film is well-written with a lot of good dialogue and interesting ideas, but I don't think the film plays with these concepts as effectively as they could've. Admittedly, however, this was meant to be more of a crowd-pleaser than anything else, so at least it accomplished its purpose. It's flawed, but it's still a real enjoyable movie and I'd definitely recommend it if you have Amazon Prime. It'll, at least, keep you entertained for 2 hours.

Christine P
June 5, 2015
A vaguely cute movie. It could have been so much better than it actually was. The main character was extremely pretty, but not terribly convincing as the tortured art lover. His award winning painting reminded me of a Thomas Kincade mass-produced print. The desert scenes made me somewhat homesick, but that was as much emotion as I could come up with for this film. (The opening scene with Michael J. Fox was the funniest part of the film!)

Yannis A
½ May 9, 2015
The screenplay makes this film interesting enough.

Mara M
October 24, 2014
My all time favorite movie, it's got great acting, engaging characters and a fascinating plot. One of those movies you'll want to watch again as soon as it finishes. A funny and outstanding movie. One that everyone should see.
Page 1 of 27