Interview with the Assassin (2002) 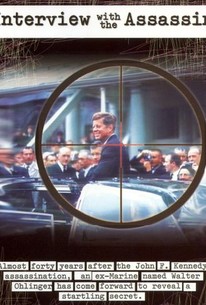 Critics Consensus: Barry is compellingly creepy as the self-named assassin.

Critics Consensus: Barry is compellingly creepy as the self-named assassin.

Critic Consensus: Barry is compellingly creepy as the self-named assassin.

Interview with the Assassin Photos

The old man who lives across the street, Walter Ohlinger (Raymond J. Barry), invites his neighbor, Ron Kobeleski (Dylan Haggerty), over because he has a secret that he's never told anyone: He claims he was the grassy knoll assassin who shot John F. Kennedy and wants Haggerty to document his confession. He has the bullet casing which he saved and says there is one witness left alive who can prove his story. The two search for the man that hired Ohlinger, but are thwarted by mysterious forces who seemingly wish to keep Ohlinger's story suppressed. Interview With the Assassin is shot almost completely from the perspective of Haggerty's video camera and it ties in a number of well-known Kennedy-assassination-related conspiracy theories, though doesn't mix them all up like Oliver Stone's JFK.

Critic Reviews for Interview with the Assassin

I haven't yet decided whether Burger is exposing our paranoia or exploiting it, but if people are more inclined to believe him than the Warren Report, is that his fault?

Interview With the Assassin is a satisfying picture that like a pot of water on the stove keeps heating up until it explodes.

There are no big-name actors and no fancy camera work. But that's what makes it interesting.

This film offers a compelling scenario of what could have happened.

Begins as a promising meditation on one of America's most durable obsessions but winds up as a slender cinematic stunt.

it adds no substantial insights into the mind of an assassin

It could've been a great thriller, but not once does Burger create a believable moment.

As for the script, it wanders around in circles when it should be building a sense of paranoia and menace.

Barry convinces us he's a dangerous, secretly unhinged guy who could easily have killed a president because it made him feel powerful.

Audience Reviews for Interview with the Assassin

loved the concept....effective camera work and superior acting by Barry..this makes the film all the more believable and is a chilling variation on the JFK conspiracy

Interview with the Assassin Quotes