Interview with the Vampire1994 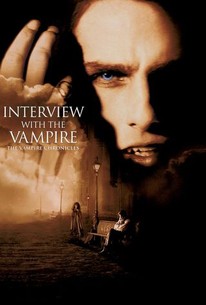 Critics Consensus: Despite lacking some of the book's subtler shadings, and suffering from some clumsy casting, Interview with a Vampire benefits from Neil Jordan's atmospheric direction and a surfeit of gothic thrills.

Critics Consensus: Despite lacking some of the book's subtler shadings, and suffering from some clumsy casting, Interview with a Vampire benefits from Neil Jordan's atmospheric direction and a surfeit of gothic thrills.

Critic Consensus: Despite lacking some of the book's subtler shadings, and suffering from some clumsy casting, Interview with a Vampire benefits from Neil Jordan's atmospheric direction and a surfeit of gothic thrills.

Interview with the Vampire Videos

Interview with the Vampire Photos

Anne Rice's best-selling romantic horror tale about the origins of a centuries-old vampire inspired this popular, atmospheric chiller. One of director Neil Jordan's major Hollywood productions, the film stays close to its source material, retaining the frame of a young reporter (Christian Slater) interviewing a man who claims to be a 200-year-old vampire. The man, Louis (Brad Pitt), shares his story, beginning in 18th-century New Orleans with his first encounters with the charismatic and decadent vampire Lestat (Tom Cruise). Lestat converts Louis to blood-sucking and immortality, but Louis fails to adopt Lestat's cavalier attitude, instead tormenting himself with guilt over his new nature. The two vampires remain deeply, if reluctantly, connected over the years, while becoming intimately involved with others of their kind, including Claudia (Kirsten Dunst), a mature immortal in a young child's body. Fans of the novel raised numerous objections, particularly after Rice initially spoke out against the casting of Cruise as Lestat; further casting difficulties followed the death of River Phoenix, whose role as the interviewer was assumed by Christian Slater. Rice later recanted her objections, and the combination of thrills and gothic romance proved popular with audiences. ~ Judd Blaise, Rovi

Virginia McCollam
as Prostitute on Waterfront

Jeanette Kontomitras
as Woman in Square

Katia Caballero
as Woman in Audience

Critic Reviews for Interview with the Vampire

Director Neil Jordan has always had an affinity for underdogs, and he has created a film that can be viewed as empathetic to any oppressed group. Homosexuals may claim it as their emotional story

It's about seduction, and either you succumb to its inky entrapments or you resist. When its mojo was working, I was happy to be had.

Why would Tom Cruise be playing Lestat, a gaunt, suave European vampire with a taste for young men? Because a big movie star can do whatever he wants.

The leading performances, if acceptable, are not everything they needed to be to fully flesh out these elegant immortals.

The major problem lies with Rice's own script, which is dramatically repetitive and philosophically banal.

Interview with the Vampire promises a constantly surprising vampire story, and it keeps that promise.

Its legacy will be that it gave the world Dunst, turned Pitt into a superstar and reminded us that the seemingly superhuman Cruise definitely had his limitations as an actor.

What works best in Anne Rice's books are the depth of characters and their psyches. Which is also one of the hardest things to incorporate into film, and notably absent...

A lavish adaptation of Anne Rice's novel with standout performances across the board and just the right amount of camp.

Cruise chews the scenery like it's covered in fried chicken skin, all but licking his fingers afterward.

This Golden Razzie Award-winner for Worst Screen Couple arrives dead and unmoving. And, mortal sin for the genre, it is not scary or campy.

Audience Reviews for Interview with the Vampire

A gloomy, romantic vampire story with an elegant dialogue and a sensual Gothic atmosphere that makes us want to know more and more about those dark creatures. Still, the film suffers from some serious miscasting - except for Dunst, who is pretty good.

Action-packed from first to last. Tom Cruise is so good at being a psycho. How did we not see this earlier??

A vampire from born in New Orleans in the 18th century tells the tale of his life to an incredulous reporter. Anne Rice's own adaptation of her novel is quite literary which tempers the melodrama to give it quite a theatrical feel, added to by a good supporting cast; Tom Cruise actually gives one of his more characterful performances and is clearly enjoying himself as the rakish Lestat. It's obviously mainly about the eye candy and gothic romanticism for the benefit of the ladies, but there is also some great period detail and interesting themes running through it; particularly the eternal child and links between voyeurism and violence. A VERY young Kirsten Dunst gives a mature performance as Louie's unwilling child/love although I felt Banderas' character was underused. It's brooding, atmospheric and has a nice line in black but playful humour and is far superior to the vast majority of it's many, many copycats.

Before the Twilight series Anne Rice had had own concoction of the beasts of bloodsucking terror turned, transformed, into suave gents making the best of a bad world. Maybe every generation needs one of their own gentleman cannibals. The true horror depicted here is living forever as a major drag. Cruise and Pitt suffer for us the ignominy of unbearable handsomeness.

Interview with the Vampire Quotes