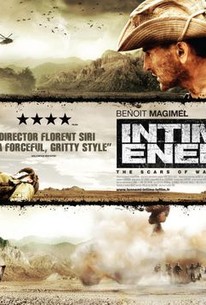 Young lieutenant Terrien (BenoÃ (R)t Magimel, Best Actor Cannes 2001 for The Piano Teacher) takes command of an outpost in Algeria, a country fighting for its independence from France. He befriends a local young boy joining his platoon and a disillusioned veteran (Albert Dupontel, Irreversible). War and its atrocities will quickly put his moral values to the test.Based on historical facts, Intimate Enemies presents a very contemporary look at war, exposing the process which can bring soldiers to torture prisoners or allies to become enemies. --© Outsider

Abdelhafid Metalsi
as Rachid
View All

A movie you've seen before, when it was set on the Apache reservation or in the Vietnamese jungle.

Along the way, Siri exposes French hypocrisy -- showing that the Algerian rebels were only doing what the French Resistance did in battling the Nazis who ruled their country in WorldWar II.

With its sententious air of historical reckoning, Enemies is an impressive monument, but not a moving one.

Says so much that's familiar if not downright clichéd, it winds up saying nothing at all.

It's all rather conventional, drawing on the blockbuster big bangs and special effects he must have picked up in Hollywood making the Bruce Willis thriller Hostage.

A harrowing but formulaic insight into the realities experiened by French conscripts during the Algerian War.

a no-holds-barred history with alarming lessons for the current 'War on Terror'.

Pulls no punches in its depiction of the gruesome nature of guerilla warfare and the ensuing decay of morality.

Truly unforgettable and revelatory, L'Ennemi intime presents a rare glimpse into the realities of war in all its gory detail, tempered with a heartbreaking insight into our inescapably frail human consciousness.

Rotman's reliance on speechifying to get his points across essentially drains anything even resembling authenticity from the film...

Director Florent Emilio Siri ('The Nest', 'Hostage') shows ability in action sequences and group dynamics but his film never develops sufficiently to raise it much above the conventional.

There are no featured audience reviews yet. Click the link below to see what others say about Intimate Enemies!