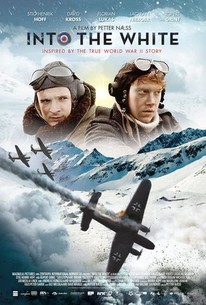 Into the White Photos

At the beginning of World War II a hostile chance encounter in the skies above the harsh Norwegian wilderness leaves two aircraft - one British, one German - shot down in a remote and isolated region. By strange coincidence the crews seek shelter in the same cabin. They must battle to survive the brutal winter in order to get back to the war - and to fighting one another. Although war has made them enemies, as the days go by animosity proves hard to maintain. Mutual need leads to unlikely friendships, and the rules of war must be put aside. (c) Magnolia Pictures

News & Interviews for Into the White

Critics Consensus: 42 Is Earnest and Inspirational

View All Into the White News

Critic Reviews for Into the White

Ponderous pacing makes this true-life tale a lot less enthralling than it might have been.

Their little world in the wooden hut they find eventually becomes a microcosm of the real one, where they can leave behind some of the sillier prejudices of war.

Although nicely produced, this second world war yarn is bland and predictable.

Grint is great, though it does peter out a little in the final reel.

Plods from one sequence to the next, unable to escape an inherent feeling of transparency, of wearing its simple themes on its humdrum sleeve.

As dramatically potent as a B-tier Disney drama, Into the White, while displaying instances of complexity, is mired by cliché and melodrama.

Simon Brookfield
We Got This Covered

Generates a satisfactory amount of suspense and personality to achieve its limited goals, successfully spinning routine with welcome attention to character.

[The cast] acquit themselves well, forging convincing and ultimately moving relationships as they learn how little petty political differences mean when starvation's at the door.

The performances are more than adequate.

This is clearly breaking no new ground. But it does what it does with some skill and likeability.

Audience Reviews for Into the White

[img]http://maatriks.eu/portal/images/Blogipildid/Into_the_White.png[/img] This is a typical anti-war film (previously titled Comrade), directed by Petter Næss. The film is based on a true story. On 27 April 1940, Luftwaffe pilot Horst Schopis' bomber, was shot down near Grotli by an Fleet Air Arm Blackburn Skua fighter, which then crash-lands. The surviving German and British crew members are not friendly towards each other, but later everything changes: in order to survive the harsh winter in the Norwegian wilderness, they have to stand together. That's how an unlikely, lifelong friendship develops. Very warm script written by Ole Meldgaard, Dave Mango and the director Petter Næss. In it two Englishmen and three Germans are all at war and they are all killers... in a war you have to be... partly driven by their own attitudes, and partly by the mechanisms of war, they acknowledge that other laws prevail. Through the well written screenplay we can almost feel that both parties are "heroes" and "villains." Perfectly cast stars David Kross, Stig Henrik Hoff, Florian Lukas, Rupert Grint and Lachlan Nieboer give extra flavour to this work of art. Nice cinematography, safe camera work, good acting and reliable director made this film a success.

Into the White Quotes