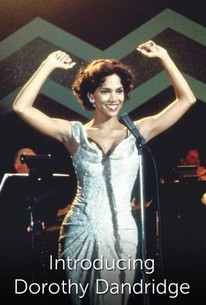 Dorothy Dandridge was a singer, nightclub entertainer, and actress who became the first African-American woman to receive an Academy award nomination as Best Actress (for her standout performance in 1954's Carmen Jones; she lost to Grace Kelly). However, despite her striking beauty and obvious talent, Dandridge was a sexy, glamorous black femme fatale at a time when Hollywood pin-up queens were supposed to be giggly blondes. The film industry didn't know what to do with her, and while her nightclub act was a bit too smooth for the Southern roadhouse circuit, as a black performer she wasn't allowed to stay in many of the hotels and resorts where she performed. Dandridge also had a sad personal life, filled with tragedy and romantic disappointment, and she died of an overdose of pills in 1965, at the age of 41. This made-for-cable biographical drama stars Halle Berry as Dorothy Dandridge, supported by Brent Spiner, Obba Babatunde, and Klaus Maria Brandauer.

Coolidge and Berry have an obvious affection and passion for this movie trailblazer, and the film they have made is an accordingly respectful tribute.

A tiny bit over dramatized but very convincing perfomance by Halle Berry.