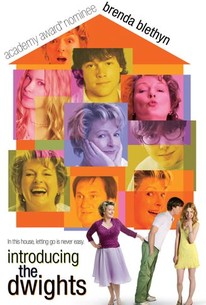 Critics Consensus: Despite a predictable storyline, Introducing the Dwights succeeds on the strength of its sweet and earnest portrayal of family dysfunction.

Critics Consensus: Despite a predictable storyline, Introducing the Dwights succeeds on the strength of its sweet and earnest portrayal of family dysfunction.

Critic Consensus: Despite a predictable storyline, Introducing the Dwights succeeds on the strength of its sweet and earnest portrayal of family dysfunction.

An already-unstable household becomes a virtual battle zone when the son of a risquÃ (C) comedienne and a has-been singer finds mom meddling in his love life in director Cherie Nowlan's dysfunctional romantic comedy. Twenty-one-year-old Tim Dwight (Khan Chittenden) comes from a peculiar family; his mother, Jean (Brenda Blethyn), is a bawdy stage comic renowned for her scatological sense of humor and his father, John (Frankie J. Holden), is a faded country-music star who now works as a low-rent security guard. While dad is busy trying to revive his flat-lined career, mom spends most of her time doting on Tim and his developmentally disabled brother, Mark (Richard Wilson). Upon meeting the beautiful Jill (Emma Booth), Tim believes his may have finally found the woman of his dreams. Unfortunately in Jean's eyes there is only room for one woman in Tim's life, and that woman is his mother. As Tim's relationship with Jill grows increasingly serious, the stage is set for a battle royal between the woman who once gave him life and the prospective mother of his future children. ~ Jason Buchanan, Rovi

News & Interviews for Introducing the Dwights

Box Office Guru Wrapup: "Transformers" Stomps on Foes To Capture #1 Spot With $152.5M Opening
Critical Consensus: "License" is Revoked, "Transformers" About as Much as Meets the Eye
Sundance News: A Busy Day For Buyers as "Waitress," "Clubland," and More Sell

View All Introducing the Dwights News

Critic Reviews for Introducing the Dwights

It doesn't quite add up as a convincingly rounded drama, thanks largely to a tepid feelgood ending, but there are many good moments - and the expert acting from Blethyn alone is worth the price of a ticket.

Brenda Blethyn gets her teeth into the role of a flamboyant showbiz monster who can't accept that her career has failed to make the big time.

This heartfelt, good-natured film grew on me, and Blethyn always commands attention.

You can't help but mourn for the hint of an intriguing film that could have been.

In the hands of Mike Leigh, this could be a masterpiece, as it is, it's forgettable fun.

Feels like a Sunday night TV drama - and not a very good one at that.

Small-minded, ambitionless, soap-opera dreck, sure to make moviegoers wish that they were never introduced to the Dwights.

A movie that works beautifully when it's on point and feels sort of hollow when it's not.

Yes, Introducing the Dwights is a melodrama, but this melodrama handles its emotional manipulation with such subtle honesty that it takes on an impressive degree of realism.

...does little more than disappoint its audience with annoying characters and stereotypical situations.

As lively as a slap in the face, this film struggles to connect with us due to an extremely unsympathetic central figure, but still wins us over with strong acting and a sweet romance.

Rich Cline
Shadows on the Wall
View All Critic Reviews (88)

Audience Reviews for Introducing the Dwights

I enjoyed this movie, perhaps because I identified a bit with Tim. There are a lot of insecure people in this movie. Tim's mom cannot stand to have someone take Tim away from her family. Tim is insecure about dealing with girls - even Jill doesn't know what to do with someone as shy as Tim. I enjoyed the actors - especially the mom who is a comedienne who borders on being funny. The part of Mark was a little confusing as there are times he seems quite delayed and others when there is little wrong with him. By the way, this movie was called Clubland in Australia, but Introducing the Dwights in North America.

Introducing the Dwights is a good comedy starring the very delightful Brenda Blethyn. The Dwights are a family lead by the single and divorced mother (Blethyn). This family with two children live in Australia. This movie centers on a mother whom is a comedian and is noticing her son is getting old enough to have his attentions be on a young lady. The realization that he may not be all her own and live at home is something difficult for her to take. A good and funny movie.

Good film - Brenda Blethyn does a great job in this one. Even though her character is a bit of a nightmare, I really found her sympathetic as a woman who had given up a lot for her relationship, (now failed), with the father of her two sons, one of whom has a learning disability, and doing a crappy day job in a kitchen to pay the bills, while following her own dreams as an entertainer in the evenings. While this movie is mainly promoted as being about the romance between her awkward younger son and his new girlfriend (nicely acted by both), it is just as much the mother's story, and I think the new beginning for her son triggers her own anxiety about her age and how her own dreams are never likely to come true after all. I found this one to be very well acted and had a lot of truth in it while still being a comedy.

I love warner independant flicks...and due to JBit's influence...starting to fall in love with aussie film...but srsly kids it was alrie...nothing terribly special.