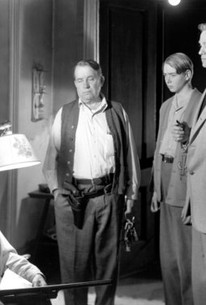 Critics Consensus: Like the William Faulkner classic it's adapted from, Intruder in the Dust confronts American racism with skilled storytelling and unflinching courage.

Critics Consensus: Like the William Faulkner classic it's adapted from, Intruder in the Dust confronts American racism with skilled storytelling and unflinching courage.

Critic Consensus: Like the William Faulkner classic it's adapted from, Intruder in the Dust confronts American racism with skilled storytelling and unflinching courage.

Intruder in the Dust Photos

Intruder in the Dust is one of the best of Hollywood's postwar "racial tolerance" cycle--a cycle that would come to an abrupt end in the politically paranoid 1950s. Based on a novel by William Faulkner, the film takes place in a small Mississippi town (it was filmed on location in and around Oxford, MS). Juano Hernandez plays an African-American landowner who is arrested on a murder charge. Resentful of Hernandez' industriousness, the white townsfolk are eager to see him hang. David Brian, the attorney uncle of a young white boy (Claude Jarman Jr.) who has befriended Hernandez, agrees to take the accused man's case. His job is complicated by the lynch-mob mentality fomented by the dead man's brother (Charles Kemper) and Hernandez' refusal to reveal the name of the man he suspects as the killer. The hostile atmosphere reaches a fever pitch, but justice is ultimately served. Intruder in the Dust stands out among other films of its period with its refusal to stoop to any form of condescension towards its black characters or to rationalize the behavior of the bigots. Though produced by MGM, the film wisely displays none of that studio's patented glossiness, opting instead for a dusty, sun-scorched, fleabitten veneer that enhances the film's basic realism.

Will Geer
as Sheriff Hampton

Dan White
as Will Legate

Edmund Lowe
as The Gowrie Twin

Ephraim Lowe
as The Gowrie Twin

Ann Hartsfield
as Girl
View All

Critic Reviews for Intruder in the Dust

As producer and director. Brown has maintained brilliant balance between the film's melodrama and its powerful social message.

Intruder in the Dust is not only a great social document but an engrossing, thrilling story of courage and passion.

While we may not like what we see on the screen, we must admit that Brown's intention in capturing the Faulkner yarn on film was a meritorious one.

Its great effectiveness lies less in its story than in, for instance, the picture it presents of the crowds gathering outside the gaol waiting for the dreadful, murderous show. The horror of this crowd is in its very casualness, its almost festive air.

The great significance of the definition of Lucas Beauchamp's role in Intruder in the Dust is that it makes explicit the nature of Hollywood's changed attitude.

[It's hard] reconciling Faulkner's beliefs with the tenets of Hollywood liberalism. Result: there is some very smooth broken-field running around all the implications that get in the way, but many of the dramatic potentialities of the plot are lost.

Intruder in the Dust deserves our award for uncommon merit, the Blue Ribbon with Palms, and an additional accolade as being worthy to be classed among the best American films in the history of the cinema.

It is a movie that earns a distant respect and admiration, and stays on top of the skin.

Intruder in the Dust belongs among the Hollywood classics of this era.

I have never seen a film done with more forthright purpose, with less emotional bias or with greater understanding than this story, which deals with bigotry.

Audience Reviews for Intruder in the Dust

There are no featured audience reviews yet. Click the link below to see what others say about Intruder in the Dust!

Intruder in the Dust Quotes