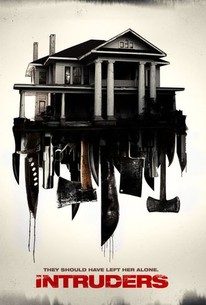 An agoraphobe (Beth Riesgraf) must battle a home invasion without leaving the confines of her house.

Ride Along 2 Isn’t Worth the Trip

[Director] Schindler plays these cat-and-mouse tropes expertly, as hunter and hunted repeatedly swap roles - but Schindler proves equally adept at playing our initial sympathies with Anna off against our escalating moral unease.

An efficiently engineered suspenser, with solid performances and a tight pace.

The result is a promising film that leaves a bad taste in your mouth, like a meal well-presented on the plate that just doesn't fill you up.

The actors alone can't sustain "Intruders" for its full 90 minutes, but for the most part they follow Starr's lead, carrying a film that's both menacing and magnetic.

"Intruders," a distasteful thriller with a bludgeoning sensibility and little common sense, turns a cozy family home into a clockwork house of horrors.

Intruders ultimately comes across like basic-cable schlock (or is it Netflix schlock now?), slightly redeemed by the germ of a great idea, even if said idea never truly germinates.

One bright spot in the film is Martin Starr's performance as one of the invaders. He is cocky and sarcastic, and though not physically intimidating his malevolent attitude makes me not want to spend any time with him.

We are intrigued to see where the film is headed once it paints itself into a corner but we are never surprised.

A debut film that has enough narrative aplomb, which is perceived through a welcome fluidity and not a little dryness to solve situations that in so many other thrillers tend to stretch artificially and / or confusingly. [Full review in Spanish]

A loose budget film that manages to reach the end with dignity with its shortcomings . [Full review in Spanish]

This film is not good nor entertaining, it's rather light, and lacks suspense and tension. [Full review in Spanish]

A film that has little to offer with characters that lack on substance, and is below Eden Lake, its immediate reference. [Full review in Spanish]

I don't really know what to make of this movie. Because I thought it did a good job at keeping things interesting in that you never actually know where the film is headed. At first, the film comes across like a regular home invasion thriller with the small little twist that our main character, Anna, suffers from agoraphobia and she has not left the house in over 10 years. That's an interesting concept in and of itself, but one that, admittedly, didn't really have a lot of mileage. What I mean by that is that you can only use her agoraphobia the first time she tries to leave the house and that's pretty much it. Though I guess you could've done something with that and how her only real escape is the one thing she's terrified of the most. But that's neither here nor there, because the film moves on to something else. It comes out that Anna is a little more resourceful than she comes across at first. Essentially, the film is about the hunters becoming the hunted. And I really liked that, because it, again, keeps you guessing. The film isn't as straightforward as it sounds, it's definitely got a lot on its mind. Essentially, Anna and her recently deceased brother, have set up this 'torture' chamber that they used to capture and keep known pedophiles in to give them a chance to redeem themselves for their actions by killing themselves. This is done as a result of Anna being sexually abused by her father, so that was interesting to see. Again, it's one of the ways the film keeps you on your toes. With that said, however, I just don't feel all of these elements come together to make a good movie. I don't really know why, but there was just something missing from this movie. It's got all the pieces to make a good and interesting horror movie, but it's just not. It's a slightly better than average movie, this is one of those that would benefit from quarter ratings. The acting is pretty solid all things considered. It's not like there's amazing work from anybody in this movie, but the acting is, at the very least, solid and adds some quality to the film. The story is interesting and I do like how the climax of it plays out, it's not a traditional climax. Well, at least at first. There's a little twist, but then things end up in the way one would expect, which is probably the only instance where they play it safe. I don't really have much else to say about this movie, it's got a really cool concept and some interesting ideas, but this still doesn't end up being more than just an above average flick. Can't really recommend it, but I think horror fans might like some of what this brings to the table, even if it doesn't add up to a good movie.