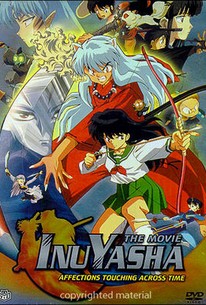 Inu Yasha: The Movie - Affections Touching Across is a feature length spinoff from the television series Inu Yasha. The son of a deadly beast that was banished centuries before by Inu Yasha's father has absorbed the energy of his father, and now seeks to take over the world and get revenge against the progeny of the person who stopped the father. The brave daughter must team with her friends to stop the deadly creature. ~ Perry Seibert, Rovi

There are no critic reviews yet for Inuyasha - Jidai wo koeru omoi (Inuyasha the Movie 1: Affections Touching Across Time). Keep checking Rotten Tomatoes for updates!

Inuyasha is an action fantasy tale written by the famous writer, Rumiko Takahashi. Toki wo koeru omoi is actually a high-qualitied animation with the carefully-done scenery, exciting action scene and nice background music that fits the story perfectly. The movie also uses a 3D technique on the growing-up forest which became more "living". Though not the best Inuyasha, but there're still a lot that Inuyasha's die-hard fans shouldn't miss.