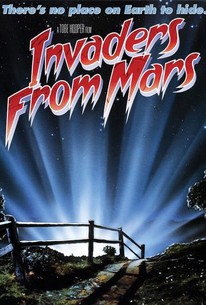 Tobe Hooper's remake of the William Cameron Menzies cult classic stars Hunter Carson in the role of David, the young boy whose world is turned inside-out by the appearance of a U.F.O.

News & Interviews for Invaders From Mars

View All Invaders From Mars News

Critic Reviews for Invaders From Mars

But while it's first and foremost a terrific showcase for some imaginative designers, Invaders From Mars also holds together fairly well as a movie.

...the first half of Invaders From Mars is easily the best, with a strange off-kilter feel that comes from slavishly updating a 50's storyline...

None of this will exactly make you faint -- either from terror or pleasure.

A hapless remake from the jokers who also gave the world Bolero, Firewalker and Breakin' 2: Electric Boogaloo.

'Marines have no qualms about killing Martians, son,' is my favourite line of dialogue from this movie . . .

As vivid as a nightmare.

Shapeless 80s horror; a drag despite a hip pedigree.

Fun and fascinating Hooper reworking of the 50s classic.

a clunky remake that fails to frighten

Audience Reviews for Invaders From Mars

Looking out of his bedroom window one night, some nerdy kid is the only one who sees the first ship landing of a coming Martian invasion. He tries to tell everyone he knows, but no one will listen: he's just a kid. And that's the backbone of this cheesy romp through the invasion subgenre of sci-fi, the fact that nobody takes kids, er, children seriously. If you come looking for quality acting or sublime writing, well, forget it. Nobody's even trying. Its a kid's film from start to finish, but a pretty good one if you'll let it be. This one is a homage to the first one done in the 1950's, so we get two films for the price of one: the kid against the alien hordes, and the homage to the original effort (which is good in its own right). Louise Fletcher steals this one though and she dies good, too. Oops.

When Tobe Hooper signed an exclusive three-picture contract with the shlockmeister Cannon Films company, I'm certain they didn't envision one of his flagships being a poker-faced, intentionally homespun remake of 'Invaders from Mars'. In his infinite carte blanche, Hooper conjures the retro 50's vibe of H.G. Wells with the soaring sub-'Superman' font of the credits. Hunter Carson is earnestly untrained as David Gardner, the floppy-haired protagonist, but the seams of prepubescent awkwardness occasionally peek through (ex. His contorted disgust to his inculcated father's guzzling ingestion of hot coffee). After her Oscar victory from 'One Flew Over the Cuckoo's Nest', Louise Fletcher's other memorably grinding-teeth role might be as David's martinet teacher who clearly relishes her anti-maternal menace when she derides David as a "silly boy". Perhaps the marketing was false advertising and the behind-the-scenes pedigree was too illustrious (Hooper, 'Alien' screenwriters Dan O'Bannon and Don Jakoby and special effects wizard Stan Winston) because 'Invaders from Mars' is not a banshee-shrieking horror movie. It's concisely a family-friendly 'Body Snatchers' from the paranoid point-of-view of a preteen and on that basis, it's a sturdily old-fashioned romp where the danger is minimal. In a pleasantly galvanizing reversal, the nurse (Karen Black) is easily cajoled by David's extraterrestrial allegations and their chemistry is the focal point for the remainder of the film which isn't ludicrous considering Black is Carson's biological son. Like the amusement-park tunnel system in 'Texas Chainsaw Massacre Part 2', the mothership set is a rococo, icky monstrosity with the sleek, joint-like construction of a H.R. Giger charcoal drawing. Despite the overwhelming temptation for postmodern irony, Hooper never condescends to the adult skepticism and General Wilson (James Karen) is a squinting, cigar-chomping tonic in the latter half ("Marines have no qualms about killing Martians'). Christopher Young's gung-ho march for the military is uncannily similar to 'Rambo: First Blood Part II'. Some might excoriate the last shot as a dreamscape cliffhanger but Carson's paroxysmal reaction vividly illustrates the terror of what he is witnessing off-screen.

Ah the classic 1953 movie revisited and remade in that classic 80's style with wacky special effects. This really is a treasure chest of 80's gold through and through. Directed by Tobe 'Texas Chainsaw Massacre' Hooper, written by Dan 'Alien' O'Bannon and with creature effects by Stan Winston, John 'Star Wars' Dykstra and Alec 'Aliens' Gillis. Doesn't get much better than that folks. The plot is surprisingly almost identical to the original classic albeit with a few minor changes here and there. One night during a storm a young boy sees a UFO land in an area behind his house (the sandpit?). He tells his parents but of course they don't believe him telling him it was a nightmare. The next day his father investigates and eventually returns with strange marks on the back of his neck, his mannerisms are odd and he seems emotionless and cold. Slowly many townsfolk start acting the same so the young boy tries to alert the authorities but has a hard time making folk believe naturally. Soon enough his school nurse starts to take notice and believe the boy and in time they manage to get the military on board to lay siege to the mysterious sand pit area. As I already said I was shocked at how faithful this remake is to the source material, it is virtually the same right down to the visual setup. Now this might sound lame (especially with this current horrendous remake trend) but if you've seen the 1953 version its quite cool to see the same stylings revamped (without the use of CGI I might add). The little pathway and hill leading to the sandpit behind the young boys house has been recreated to look just like the original film and it looks splendidly creepy. The alien ship interior is basically along the same kind of lines but obviously much more futuristic (for the time) and of course all the characters are almost identical, although some characters have different job roles here. It was also sweet to see the original lead boy actor from the 1953 version play the police chief in this movie. The major changes come in the visual effects department for the aliens and obvious things like the spaceship, makeup and a few minor horror moments. You can easily tell the rubbery monster/alien suits are Stan Winston's work, I can tell his creative style a mile away. The main head alien, the brain, was literately that...a fat pink brain that basically looks like Krang from the 'Teenage Mutant Ninja Turtles' franchise. I believe this design did actually surface before the introduction of Krang in the animated TMNT series in 1987, so maybe this movie influenced that cartoon? Anyway this powerful double pupiled alien really looks tremendous if a little motionless. The other mobile aliens (if you can say that) are quite bizarre, honesty I don't know why they went with this design but they basically look like giant testicles with huge gaping jaws and four legs. Huge lumps of gristle with huge mouths lined with razor sharp teeth and four camel-like legs. Clearly very large and heavy rubber suits with the two front legs being for the performer inside and the rear two probably mainly being stability. Its very clever how they have done it but alas these aliens do look totally cumbersome, not very agile...not very mobile at all really and completely useless in an evolutionary sense. How on earth these aliens managed to build spaceships or develop technology I don't know, there must be other types of alien that helped them. One thing that does stand out was the bad acting which seemed strange to me seeing as this felt like a biggish production. Yeah sure this is meant to be a science fiction B-movie of course so possibly the cast acted badly on purpose? I kinda doubt it honesty, maybe some did but most I think were just poor, especially the main protagonist, the young boy. This kid really couldn't act, it was quite painful at times. He was also kinda tubby and clearly had trouble running too *giggles*, the amount of times he's running away from someone and its laughable, so slow! I guess when one of the main leads from the first two 'Return of the Living Dead' movies (James Karen) is in the film, you should know to expect some grilled cheese. But honesty no one here is very good, there is lots of hokey shouting, screaming and really obviously slow running away from dangerous things. Of course the finale won't be much of a surprise if you've seen the original film because this ends the same way. In fact it ends exactly the same accept for the cliffhanger moment before the credits role where all we see is the young boy rushing to his parents room, stopping and screaming in terror. Its a typical 80's finish, the kinda thing you'd see in an 80's horror anthology movie, its left to your imagination...and nightmares. The tension does seem to have gone from this newer version, I kinda expected it to be a trashy 80's gore fest, the movie poster does lend itself to that. On the other hand I did think it could of been a John Carpenter flick at times, if you didn't know any better it could seem that way, it has those dark comedic tones much like 'They Live'. On the whole its certainly a blast if you're into practical hands-on effects with larger than life creature suits and prosthetics but don't expect many thrills or blood. Considering the director its actually relatively tame.