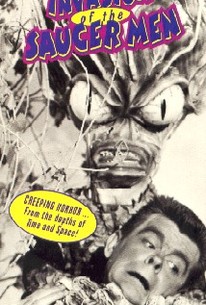 Invasion of the Saucer Men Photos

Invasion of the Saucer Men can't make up its mind whether it wants to be a comedy, a j.d. melodrama or a horror outing. When a spaceship lands in the woods, Johnny (Steve Terrell) and Joan (Gloria Castillo) accidentally run over one of the aliens. In retaliation, the saucer-men kill Joe (Frank Gorshin), an opportunistic boozehound who stumbles across the body. Meanwhile, the hand of the extraterrestrial corpse detaches itself from its body and wreaks havoc on the countryside. But the aliens are foiled when it is discovered that they cannot withstand the glare of automobile headlights! The Saucer Men costumes were designed by Paul Blaisdell, who was certainly capable of better work. Lyn Osborn, the former Cadet Happy on TV's Space Patrol, makes his final screen appearance as Frank Gorshin's drinking buddy. Originally released on a double bill with I Was a Teenage Werewolf, Invasion of the Saucer Creatures was cheaply remade for television as The Eye Creatures (1966).

Critic Reviews for Invasion of the Saucer Men

The cinematic highlight is an alien/bovine encounter that's not to be missed.

A film that can never go out of style because it is so bad that it never was in style.

Audience Reviews for Invasion of the Saucer Men

These fifties paranoia films were fantastic. If you can get over the fact the aliens are all large bug eyed rubber legged toys with men inside this is a film for you. I loved them as a kid and doubt that will ever change.

Invasion of the Saucer Men Quotes