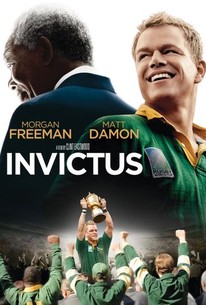 Critics Consensus: Delivered with typically stately precision by director Clint Eastwood, Invictus may not be rousing enough for some viewers, but Matt Damon and Morgan Freeman inhabit their real-life characters with admirable conviction.

Critics Consensus: Delivered with typically stately precision by director Clint Eastwood, Invictus may not be rousing enough for some viewers, but Matt Damon and Morgan Freeman inhabit their real-life characters with admirable conviction.

Critic Consensus: Delivered with typically stately precision by director Clint Eastwood, Invictus may not be rousing enough for some viewers, but Matt Damon and Morgan Freeman inhabit their real-life characters with admirable conviction.

The film tells the inspiring true story of how Nelson Mandela joined forces with the captain of South Africa's rugby team to help unite their country. Newly elected President Mandela knows his nation remains racially and economically divided in the wake of apartheid. Believing he can bring his people together through the universal language of sport, Mandela rallies South Africa's underdog rugby team as they make an unlikely run to the 1995 World Cup Championship match.

Shakes Myeko
as Minister of Sport

David Dukas
as Captain of 747

Grant Swanby
as Co-Captain of 747

Meren Reddy
as Minister of the Environment

Given Stuurman
as Township Kid

What strikes you most about this film is just how much pleasure a sure-footed, confident director can deliver by keeping everything simple.

It is probably enjoyable and rousing enough, and does feature a lovely performance by Morgan Freeman as Nelson Mandela.

Invictus is Eastwood in full Stanley Kramer/Richard Attenborough mode, playing down to the Americans who love cheesy triumphant-sports movies but who generally know little about South Africa and care even less.

Morgan Freeman's portrayal of Nelson Mandela creates a superb moment in time on the movie screen.

A noble and compassionate work that in its later scenes manages successfully to invest our emotions in the triumph of an important - if overlong! - sporting victory.

Invictus may be a rather cheesy way into the story of South Africa, but in the end you're glad it's there for a new generation to whom the words "Free Nelson Mandela" are history.

It's all quite draining, with one enthusiastic hurrah after another, until there couldn't possibly be any more motivational orations.

Invictus sometimes plods just when it should be fleet of foot.

It is a film that will likely entertain both history buffs and fans of sports films.

Freeman was born to play his friend Mandela in Eastwood's inspiring movie.

There's plenty here to keep the interest for most, and the performances, particularly Freeman's, are excellent.

Invictus is a powerful and moving story.

Freeman brings Nelson Mandela to life in an exceptional performance indeed but this barely ordinary drama - inspiring as it may be - fails to match the greatness of its real-life character due to Eastwood's poor directing choices and blatant political naiveté.

A moving film but not as powerful as I anticipated. Nevertheless, it does have an important message and reminds one of the great heroism and uncertainty of post-Apartheid South Africa. Matt Damon and Morgan Freeman both give noteworthy performances.

Sports movies usual have social/political redemption/justification as a subplot and Eastwood's entree here is no different, with racial equality thrown in on the side. You know the ending from the very first. And so its up to his leads to carry the weight of "its more than just a game" ballast, which Freeman and Damon admirably do w/o a problem. I learned a bit about rugby, and South Africa seems more of a welcoming place now, so its "mission accomplished!".

The true story of newly elected South African president Nelson Mandela making it his top priority to unite the nation thanks to a successful rugby team. Morgan Freedom is the obvious but perfect choice as Mandela and really turns into the politician, which is particularly difficult considering he is a contemporary celebrity many people are still familiar with. The film stays focused on the president, his ideals and small steps to get the white and black people of South African to overcome the years or resentment. So it's not until the second half that the movie follows the usual sports drama steps, but remains really well done. The sport scenes look realistic and well filmed, but for people unfamiliar with the game, the lack of commentary makes them look kind of arbitrary. That doesn't change the fact that the film is heading for a moving and satisfying climax. It's nice to see that sometimes history does make the right choices and people can change.