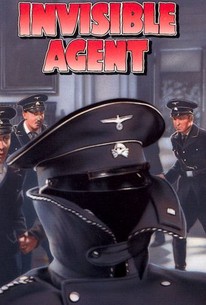 Universal's "Invisible Man" series does its bit for the war effort in this slyly tongue-in-cheek action melodrama. Jon Hall stars as Frank Raymond, grandson of the man who invented the invisibility formula several pictures back. When Nazi agents try to coerce the secret formula out of Raymond, he eludes them by becoming transparent himself. Shortly afterward, the US government parachutes Raymond behind enemy lines, reasoning that an invisible counterespionage agent would be an invaluable tool in defeating the Axis. He is aided and abetted by the beautiful Maria Sorenson (Ilona Massey), who may or may not be in league with villains Helser (J. Edward Bromberg in a scene-stealing turn), Stauffer (Cedric Hardwicke) and Japanese spy Ikito (Peter Lorre). As was always the case in Universal's mid-1940s fantasies, David Horsley's special effects work in Invisible Agent is absolutely first-rate, with some truly eye-popping moments. Incidentally, this is the film in which an elderly victim of Nazi persecution moans "I can't sign? I can't sign? You have broken my fingers!"

The whole film is inappropriate.

Invisible Agent Dissolves in the Air but Not in Our Hearts

The scenes of Nazi politics, exactly the material that ruins the pacing all, are also the only place where the film comes to life.

If viewed as a feel-good wartime propaganda film, the film is most effective.

True greatness. The invisible man was perfect as a behind-the-enemy-lines spy during World War II. Plenty of humor and thrills in this action film, featuring a very recognizable supporting cast, including Keye Luke and Peter Lorre.

Tailoring the series for the war effort, the occasionally entertaining The Invisible Agent does little for morale, but winningly keeps the SFX at the forefront. Aping Charlie Chaplin (The Great Dictator) and The Three Stooges (You Nazty Spy!, Ill Never Heil Again) in making the Third Reich out to be a buffoonish laughingstock, this harmless film keeps the tone light even when its trying to be serious. In this unrated continuation of the Universal series, the Invisible Man's grandson (Jon Hall) uses his secret formula to spy on Nazi Germany. Here, Peter Lorre gets better material than with The Invisible Woman. Hes joined by Ilona Massey and Cedric Hardwicke in a tale that's more rousing and enjoyable than it deserves to be. Hats off to Kurt Siodmak, a screenwriter who churned out a ridiculous amount of scripts for every Universal horror franchise but The Mummy including Dracula (Son of Dracula), Frankenstein (House of Frankenstein), The Invisible Man (The Invisible Man Returns), and, The Wolf Man (Frankenstein Meets the Wolf Man). This espionage thriller-cum-comedy might not approach the quality of his crowning achievement (The Wolf Man) but its funtastic enough to earn him huge respect just for his overall batting average when it comes to quality and output. Bottom line: Spy Gamey

Fourth entry in The Invisible Man series is a semi decent horror adventure with bits of comedy thrown in. The film had a great idea, but I felt it lacked the real fire that the plot suggested. I mean, really the plot was interesting, creative and interesting. However the film ends up feeling somewhat silly, and the finished film lacks somewhat to really make it good. The film is a decent entry in the series, but it never becomes anything better than it is. The ideas were fantastic for this film, however the execution feels a tad poor and it wasn't really a fulfilling experience. Considering the plot direction, the film could have been a lot less silly and considering how the film starts out, it's surprising that the film has more gags going on on-screen. I liked the film, but as much as I'd wanted to. It's too bad because the story had the potential to be excellent, but really it leaves a lot to be desired. The film had plenty of things that could have been improved upon such as the attempt at humor. The film is and entertaining, but it lacks as well. The film had the potential in being something very good, but it's only somewhat decent. The film is decent, and entertaining, but in the end it leaves unsatisfied with the finished film. Considering such a unique plot, this could have been one of the best of the series. Though not perfect, this is still entertaining, but you'll notice that it could have been done much better.

Again Curt Siodmak wrote this. Siodmak wrote a lot of the Universal monster movie sequels and wrote the original Wolf Man. All of these sequels to The Invisible Man cannot rightly be judged as comparable horror movies though. This one is an espionage tale with some war time propaganda and a romance in the mix. Jon Hall plays Frank Raymond (AKA Jack Griffin), the grandson of the original invisible man. He doesn't know how to produce the invisibility chemical himself he claims, but he inherited enough to use in the future. Again in this story, he knows the extreme danger in using the chemical and so he has no intention of ever using it. Especially when agents from the Axis powers come and try to strong arm him into working for them. Cedric Hardwicke makes his second appearance in an invisible man movie as another villain. This time he is a Nazi officer named Stauffer. This was released the same year as Casablanca and Peter Lorre (just because he's exotic) plays the Japanese Baron Ikito. Griffin, or excuse me, Raymond doesn't even want the Allied powers using the invisibility formula. That is until, duh duh DUH, Pearl Harbor is attacked. Raymond marches right to a meeting of the Allied powers and volunteers to be an invisible agent who will go to Germany to gather some intelligence. Once he parachutes in, he meets an old carpenter who is his contact in Germany. He meets Ilona Massey as Maria Sorenson who is a double agent and right away they charm each other and fall in love. Bromberg as another Nazi officer named Heiser is trying to smooth talk Maria as she tries to loosen his tongue. The invisible agent makes a fool out of Heiser before he reveals the details of Hitler's plan to attack America. So the plot is extended because he's made it more difficult for himself to find the information and Stauffer and Ikito are now suspicious of Maria and suspect an invisible man might be about. The movie portrays that the Germans and the Japanese don't really trust each other, so it gives Americans the comfortable feeling that they are bound to destroy each other. Heiser stays in the action and Maria is suspected to be a triple or quadruple agent. But the big thing is that the invisible man never encounters the threat of going mad this time. In fact, he's a bit of an insomniac. He's such a good all-American boy who is serving his country during it's hour of need that the megalomaniac tendencies of the drug just fade away. Again, visually, the effects that suggest the invisible man is in a room come off as slapstick. Wires are visible on some of the props again and there aren't really that many new effects introduced. Instead of bandages wrapped all around his head, this invisible man smears cold cream on his hands and face and wraps a towel around his head like a woman having a spa treatment. This preserves his handsome facial features and removes him further from the scary monster imagery. The movie is enjoyable at times and the propaganda is really not that bad.