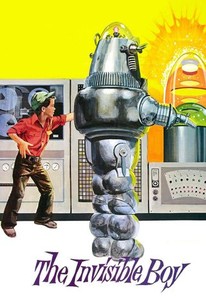 Dr. Tom Merrinoe (Philip Abbott) is a man at the top of his profession, as the head of the Stoneman Institute of Mathematics, a top-level research facility whose resources include a gigantic super-computer, capable of solving virtually any problem put to it. He works with some of the most distinguished institutes of learning and research in the world, and is presently helping the military launch an orbital space platform vital to the security of the country -- and he can get personal telephone access to the President of the United States on less than five minutes' notice, if the need arises. But his home life is less fulfilling -- he and his loving wife Mary (Diane Brewster) work hard to make a good home, but their 10-year-old son Timmie (Richard Eyer) is more interested in making mischief than studying, and can't be motivated to learn even basic math. Desperate to show him the importance of mathematics, Dr. Merrinoe takes Timmie to his place of work. Unbeknownst to him, however, while the boy is left alone in the lab, the super-computer implants a hypnotic suggestion in Timmie's mind. Suddenly, Timmie shows astonishing skills in chess, as well as both electronics and mathematics, and the first task he accomplishes, apart from beating his father in chess, is to assemble the pieces of a robot that Tom and his colleagues had written off as a pile of useless junk -- supposedly, according to Tom's now-deceased predecessor, the robot and its plans were brought back from the twenty-third century. That mechanical man is none other than Robby The Robot, previously seen in Forbidden Planet -- and suddenly, the boy and the robot are playing pranks and going on adventures together, Robby even providing a way for the boy to turn invisisble, which allows him to get even with one bully at school and to spy on his parents, for which he is soundly punished. But amid the seemingly light-hearted mischief with which he assists the boy, the mechanical man sometimes seems to be following two sets of orders, one from Timmie, and one, a lot more quietly, from the super-computer. Ultimately, the computer and the robot join forces in a plot to take over the space platform and rule the world -- with Timmie held hostage in orbit, and threatened with a slow, painful death unless his father agrees to serve the computer.

Than Wyenn
as Prof. Zeller (uncredited)

Michael B. Miller
as MP at gate (uncredited)

Marvin Miller
as Robby the Robot
View All

Critic Reviews for The Invisible Boy

In declaring it ripe for the MST3K treatment, I'm really saying that if you don't like movies, you might have a good time going after this one.

Adults as well as children should be entertained by this sci-fier that succeeds without much technological gadgetry, instead relying on its charm.

Audience Reviews for The Invisible Boy

This was included on the 50th Anniversary Special Edition DVD of Forbidden Planet. Robby the Robot, who I think is way too clunky and old-fashioned, is recycled for use in this awful film. The boy, Timmie (Eyer), is a complete brat and I didn't like the character at all. His father, a scientist, is disappointed that his boy can't play chess and that he does not have the same interest in science. The father has built and programmed a humongous computer for a secret military research facility. The computer's "head" is the same sort of vacuum tube that shapes Robby's head. It is one of many ridiculous scenes when the father takes his son to learn chess from the computer. The computer speaks, but in 50's fashion has LOTS of blinking panels. It hypnotizes the boy! The boy can now win chess, reconstruct Robby the Robot, and by plugging the room sized computer into Robby, remove Robby's basic directive forbidding bodily injury to humans. The super computer is malevolent. Timmie has fun causing mischief including having Robby make him invisible. Meanwhile, Timmie's father has to deal with rival scientists and scheming military officers. There are murders. There are computer chip things imbedded to allow the computer to control nearly every character. There is a rocket launch. The dialog is all terrible. The characters are all shallow stereotypes. The plot is all over the place and ludicrous.