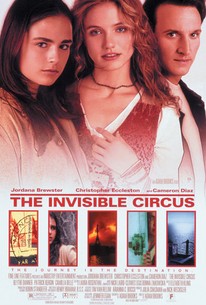 Critics Consensus: Despite Jordana Brewster's strong performance, The Invisible Circus lacks the necessary dramatic tension to be interesting. Also, the cultural and political contexts of the period are barely explored.

Critics Consensus: Despite Jordana Brewster's strong performance, The Invisible Circus lacks the necessary dramatic tension to be interesting. Also, the cultural and political contexts of the period are barely explored.

Critic Consensus: Despite Jordana Brewster's strong performance, The Invisible Circus lacks the necessary dramatic tension to be interesting. Also, the cultural and political contexts of the period are barely explored.

A young woman trying to better understand the fate of her sister finds herself following in her footsteps in this emotional drama. 18-year-old Phoebe (Jordanna Brewster) has been haunted by the memory of her sister Faith (Cameron Diaz), who died under mysterious circumstances while travelling through Europe several years earlier. Looking for closure, Phoebe decides to retrace her sister's journey in hopes of finding out what happened to her. In the course of her travels through France, Portugal, and the Netherlands, Phoebe crosses paths with Wolf (Christopher Eccleston), Faith's boyfriend, and finds herself falling for the man her sister once loved. Based on the acclaimed novel by Jennifer Egan, The Invisible Circus also features Blythe Danner and Camilla Belle. The film marked the directorial debut for screenwriter Adam Brooks.

Critic Reviews for The Invisible Circus

Picturesque European locations, a mystery whose successive folds will be uncovered by Faith's ex-boyfriend (Christopher Eccleston, in a ratty wig he will have to live down for years), and some heavily psychological sermonizing.

A credible portrait of an era, and draws in its tensions and conflicts with quite some power.

Strangely dispassionate and uncommitted for a movie about passionate commitment.

A movie for people who are so sensitive they barely notice the feelings of others or what's going on in the world.

A woefully tame and pallid affair.

Never finds a rhythm it's comfortable with, nor much to say that's not been said before.

Okay for older teens, but nothing special.

[A] dreamy and meditative film [about] the disillusioning unfolding of the real, cold, hard world as we grow up.

Adam Brooks' film is a total miss, both as a potentially intriguing look into the tumultuous politics of the 1960s and 1970s and as a coming of age of a girl obsessed with her sister's mysterious death

Whenever Brooks hits a stride, the mystery element takes over, and that crudely formed aspect of the film overwhelms what is fully functional.

By the time the uninspiring finale occurs the audience is completely lost in boredom and longing for the credits.

Audience Reviews for The Invisible Circus

I don't know who keeps giving hippies money to make movies, but I wish they'd stop.