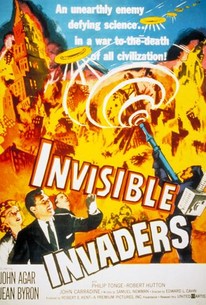 Monstrous moon goons plot to take over the Earth in this silly sci-fi/horror drivel. The formless aliens (whose invisibility was no doubt a cost-cutting measure) enact their insidious plans by taking over the corpses of the recently dead -- a premise bearing a more than passing resemblance to Ed Wood's legendary Plan Nine from Outer Space. Leading the zombie attack is John Carradine as an undead scientist; a hammy John Agar steps in to save the day by inventing an ultrasonic sound device to repel the aliens. Though not as delightfully awful as Wood's anti-classic, this is a definite clunker, padded with stock footage, littered with horrendous acting and even worse attempts at special effects.

Hal Torey
as The Farmer

This is a classic in bad sci-fi B-movies.

There are no featured audience reviews yet. Click the link below to see what others say about Invisible Invaders!