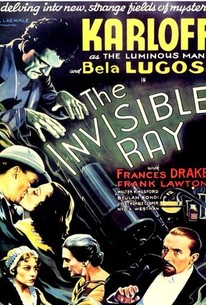 The Invisible Ray a science fiction/horror film directed by Lambert Hilyer is notable chiefly for its ground-breaking special effects by John P. Fulton, who also did the effects for The Invisible Man series. Dr. Janos Rukh (Boris Karloff) using space and time travel, and aided by fellow scientist Felix Benet (Bela Lugosi) searches for a meteor which contains "Radium X," a substance more powerful than radium. Rukh is contaminated by the radiation and kills whoever he touches. Despite a short-term antidote, Rukh finds himself slowly going mad and has paranoid delusions that others are plotting against him, with deadly results. While the story and acting in this somewhat dated horror film are just average, the special effects are outstanding and should be seen by any fan of the genre.

Georges Renavent
as Chief of Surete

Stewart Lawrence
as No. 1 Boy

Winter Hall
as Minister
View All

Critic Reviews for The Invisible Ray

As the story unreels, you realize that this is just another case of a man's manager bringing him along too fast. It is no wonder Karloff's mind cracks under the strain.

It's briskly staged with some fine camerawork, and Karloff -- turned into a radioactive killer and melting down a symbolic statue after each death on his vengeance trail against his wife and the colleagues he feels have betrayed him -- is great.

A nifty blend of horror and science fiction.

other than being lightly entertaining, this science fiction pic is no Frankenstein.

What really sells the film is less its impressive look and sound or unusually expansive length, but more the fact that it's completely all about its two stars.

Passable but rather melodramatic hokum.

Audience Reviews for The Invisible Ray