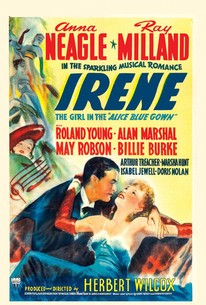 In this remake of the 1926 silent hit (which was in turn based on a hit musical from 1919), Anna Neagle stars as Irene O'Dare, an Irish girl of humble beginnings who comes to New York in search of work. She finds a place as a shopgirl at a fashionable and expensive boutique managed by Mr. Smith (Roland Young). Irene does well at her new job and soon finds that two wealthy men are vying for her affections. Don Marshall (Ray Milland), the owner of the store, is much attracted to Irene, but so is socialite Bob Vincent (Alan Marshal), which does not come as a pleasant surprise to Eleanor Worth (Marsha Hunt), Bob's sweetheart. Irene features several (but not all) of the songs from the original stage production, including "Castle of Dreams", "Worthy of You", "You've Got Me out on a Limb", and "There's Something in the Air". The "Alice Blue Gown" number was shot in Technicolor, while the remainder of the film is in black and white. ~ Mark Deming, Rovi

May Robson
as Granny O'Dare

Marsha Hunt
as Eleanor Worth

Alex D'Arcy
as Dumont, the Couturier

Syd Saylor
as Gardener
View All

There are no critic reviews yet for Irene. Keep checking Rotten Tomatoes for updates!

Sweet film with top flight cast, and the color sequence is a knockout, that is missing something that would take it to a higher level. Tries for gossamer charm but doesn't quite achieve it. Pleasant but no more.