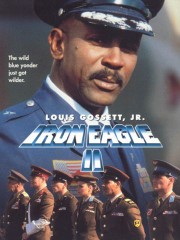 Joel C
½ May 16, 2017
This was one of the most horrible movies I've ever seen growing up in the 80s. From the hot shot pilot using lines from Top Gun, I would have said, I'm not quoting Top Gun, you're nuts. The plot of the movie was horrible , that acting was horrible. One of the worst films ever made.

Cameron F
May 4, 2016
Cappy saves the day in this pointless sequel.

Super Reviewer
Phil H
½ May 9, 2014
Gedrick returns at the start only to be blown out of the sky in an early dogfight but Gossett lives on to play in another mission.

This time Gossett must train a small group of ragtag US pilots and a small team of no nonsense Russian pilots. Together they will team up to take out a nuclear warhead base in a diplomatically unnamed Middle Eastern country.

The story is actually based very loosely on a real mission also in 1981, that's probably the most interesting part of the film as the rest is pretty dire stuff. Half the film is just the two teams of pilots training and fighting amongst themselves in an almost 'Police Academy' type situation. Gone are the montages accompanied by 80's pop music, this time its a bit more serious and not aimed at very young male kids.

We still have the same type of flight sequences which look suspiciously like the same sequences from the first film, or at least filmed at the same time and carried over to this sequel. Everything was shot for real in Israel using Israeli pilots and jets (just like the first film) so is it coincidence that they set the first two films in Israel? money saver seeing as they were there?. Air destruction and ground action utilizes a lot of models again which unfortunately do stand out as models, more so when they are blown up, just like the first film again.

Still desperately trying to capitalize on the success of 'Top Gun' but obviously not coming close. This film fails to even better the original as its taken too seriously and is still only TV movie quality at best.

They still couldn't resist the rousing Kenny Loggins type music track for the end credits, they really try to make this ice cool.

Super Reviewer
Alex r
January 2, 2014
Sequel to the Top Gun rip-off, Iron Eagle, Iron Eagle II is a bad clichéd riddled film that has a poorly written script, poor cast and overall really sloppy direction and little emphasis on quality and excitement. This is pure B movie trash that is lazy in its execution and in the end it's a poor attempt at an action film. I found the original to be decent fun, one of those films that are so bad it's good, however here; there is nothing to suggest to the viewer that this will be a fun, trashy B flick. Oh, it's bad, but not the so bad it's good film you'd like it to be. I really don't see why they made a sequel to Iron Eagle, it's very unnecessary as the first film didn't have anything special going for it. This film is pointless and is just a waste of time. Don't watch it, as you find a shroud of originality here. The ideas become more ridiculous, and the performances are laughable, even by this series standards. Watch the original instead, it wasn't much, but it was a campy, entertaining decent action film that didn't need a sequel. The writers here try to make something that might look exciting on paper, but when the result is displayed on-screen, it's laughable and pointless from start to finish. The action is bland as well as the acting. If you enjoy low budget B films, you may enjoy this, but to others, this will be an awful let down. Definitely not worth seeing. Stick with the first one, which was definitely not great, but it did manage to provide cheesy camp value.

Scott C
½ March 5, 2013
The first one was cheese, but well done cheese. This is just mildewy cheese. Iron Eagle III was so bad it's kind of fun. I could never bring myself to watch part IV.

Shawn W
½ October 27, 2012
Unprofessional American pilots team with Soviets in a joint mission. Still wondering why the original movie's hero, Doug Masters, is inexplicably killed by goofing off in Soviet airspace. Shameful that Jason Gedrick is not even credited.

Trista J
August 25, 2012
It was ok at it's best. It is unrealistic beyond belief but it's somewhat interesting. Besides Humphrey was quite easy on the lady eyes in this one.

Geoffrey G
May 9, 2010
I had problems liking this even as a kid. Maybe they needed better music

Jeremy S
April 20, 2010
Really? They made another one ....with soviets as well? Next thing you know they'll have one AMerican fall in love with a soviet fighter pilot.....wait that did happen damn

Michael W
½ March 7, 2010
More complete nonsense (just not as enjoyable) involving US and Russian fighters converging on a new enemy in the Middle East. Killing off Doug Masters seems unnecessary; none of the characters are worth cheering, except Gossett of course.

Ken T
February 18, 2010
This was one of those that you can actually not complain about the making of it...Usually sequels suck. This one didn't..."

Shawn W
½ October 14, 2009
Unprofessional American pilots team with Soviets in a joint mission. Still wondering why the original movie's hero, Doug Masters, is inexplicably killed by goofing off in Soviet airspace. Shameful that Jason Gedrick is not even credited.