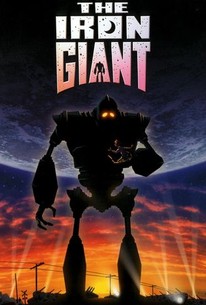 "Iron Giant" is based upon the 1968 story,'Iron Man,' by the British poet laureate Ted Hughes. The film is about a giant metal machine that drops from the sky and frightens a small town in Maine in 1958, only to find a friend named, Hogarth, that ultimately finds its humanity and saving the towns people of their fears and prejudices.

Vin Diesel
as The Iron Giant

News & Interviews for The Iron Giant

23 Fresh Movies and TV Shows Streaming on Netflix in April
Ready Player One Easter Egg Watchlist: What To See Before Seeing Spielberg’s Latest
Pacific Rim: Uprising Might Be Too Intense for Kids, so Here Are Three Robot-Themed Alternatives

View All The Iron Giant News

Critic Reviews for The Iron Giant

The Iron Giant captures and crystallizes its source material's anxious, humane spirit. It might be the most empathetic and exhilarating mainstream American animated feature ever made.

Tender, moving and exciting for kids (and their secretly tearful parents).

Watching this again 17 years after its original release, I savoured again the resemblances to Spielberg, Wilde and Brian Forbes's Whistle Down the Wind.

While youngsters will enjoy the film on one level, it reaches out to adults on a completely different plane. They will see an allegory about power and politics and the danger of allowing either to run roughshod over humanity.

This is not exactly standard children's fare, but kids (and their parents) should be smitten by its wit and wisdom.

The Iron Giant is not only the best animated feature to be released this summer, it's the single best film to hit our screens so far this year.

...an incredible achievement in both narrative and animation.

I found The Iron Giant to be a completely engaging movie experience. I laughed. And, yes, I cried, too. Moreover, I felt like I'd really gotten my money's worth when I left the theater after watching it.

The Iron Giant should have been immediately recognized as a near-perfect, classical expression of imagination, combining childlike wonder and adult sophistication.

This is, full stop, one of the best animated movies of all time; an enduring classic.

Audience Reviews for The Iron Giant

When people call a movie an instant classic, that could either mean they're simply calling it a terrific film or truthfully believe that it'll be a movie people will be looking back on in about 50 years as one of the greats. I can only speak for myself, but The Iron Giant has aged very well and still remains to be one of the best movies of its kind. On top of that, Warner Bros. hasn't really been known for their animation lately, which is sad, due to the fact that they clearly had a home run with this film, at least in terms of quality. No, the box office return wasn't all that great, which surprises me, because they could've easily marketed it in the style of E.T.. That being said, I'm not here to talk about the "what-ifs" surrounding this film, but rather the film itself and how it holds up. If you haven't seen this film yet, here is why it should be a top priority of yours. From the moment this film begins, you know the type of movie you're in for. If you're looking for a film about a monster destroying cities, then I recommend checking out King Kong or Godzilla. The Iron Giant is as much about emotion as it's about spectacle. Crash landing on Earth, a giant robot befriends young Hogarth, a boy who doesn't seem to have any close relations with people his age. At first being terrified, he comes to fall in love with this giant and they form a very unlikely bond. Nowadays this story seems to have been done many times, but this film was released around the time that it still felt relevant and fresh. Their bond and outlook on life truly make this film as incredible as it is. There is always a fear with big Hollywood productions, as they can easily be thrown together quickly in order to earn a few bucks at the box office. Whether it's a low or high budget live-action or animated feature, the characters are a huge piece of the puzzle in every case. Sure, Hogarth, his mother, and Dean are all very well-drawn characters, but the secondary characters in the military and the very annoying Kent aren't stupid in the slightest. Never once did I find myself wishing for anyone to be off-screen. There are no dumb decisions, just persistence and choosing to believe certain things. I either genuinely loved characters throughout this film or genuinely loved hating them. These are some very well-done characters. From its violence message to its pure fun factors, there is a little bit of everything packed into this very short 90 minutes that I believe people of all ages will be able to enjoy forever. Nowadays with films like Transformers, we have non-stop action sequences with very little substance and films with a great story or characters, but fails in its execution or excitement, like Eragon. I know Eragon is a horrible example, but those books have quite a bit of substance for kids and the movie is complete garbage with dated effects. Whether you are an adult who can find yourself tearing up at the emotional dialogue toward the end of the film, or you are a kid who wants to see a giant robot in a movie, The Iron Giant is one of the rare films that can easily please everyone. In the end, this is a film that has grown on people over the years, as it was never a financially successful movie, but that has almost benefitted the film as a whole. As more and more people either discover this film for the first time or show it to their young kids, a new found love will forever be had with this movie. For what this film set out to accomplish, it's a flat out masterpiece. Sure, comparisons will always relate back to that of E.T., and while the first two acts are similar, the finale couldn't be any different. I personally think this film stands on its own without comparison. The Iron Giant is a fantastic film from beginning to end and I highly recommend it to those who have yet to discover this perfect little gem.

Thoughtful, heartfelt and not to mention its wonderful animation. The Iron Giant is a rare animated picture that blends mystery, drama and overall family-fun. The unexpected joy and praise makes this film a timeless achievement for both its director and its voice counterparts. 4.5/5

An alien from the skies befriends a young boy and their friendship is the center of this tale about loyalty and family in the face of serious opposition. Most everything here is done with a light touch allowing the audience, us, to come to our own conclusions with the exception of the bad guy, a government agent. Its a decent story decently told and worth looking for.

Brilliant animated feature, The Iron Giant is an entertaining ride from start to finish, and a real treat for the eyes. I thoroughly enjoyed the film, and it boasts some great animation, effective direction that keeps you entertained with its story, which is pretty simple, and in doing that, we have something quite charming, funny, entertaining and of course memorable. This is a fine piece of animation, a film that really is well done in the way they delivered its ideas, and it is an enthralling, wonderful movie that I recommend to any viewer that enjoys a solid animated feature. The Iron Giant boasts a great cast of varied voice talent, and they brilliantly bring these characters to life. The film isn't your typical animated features such as the computer animated ventures of Pixar, and this one venture more in the cartoon department, but it does it very well that it can appeal to any age group. The film is tailored to anyone that enjoys a fun, entertaining picture that is beautiful to look at and is engaging from start to finish. This is a great movie, one that should be enjoyed by anyone that loves a solid animated feature. The Iron Giant is terrific for what it does, and with its simple ideas, we have a film that accomplishes much more than what we would get than your usual film that overdoes everything in order to grab the viewer's attention. Sometimes all you need is a simple idea, great direction, a well crafted story to make a very good film, and with The Iron Giant, we have such a film.