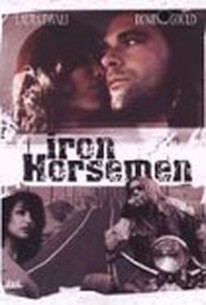 This European film, shot entirely in rural Finland, parodies American biker movies from the 1960's. It tells the strange and convoluted story of acid-head, biker Bad Trip who belonged to a motorcycle gang known as the Cannibals. Trip is on the run from his former gang after he is caught stealing gang leader Candy's bike. As he tries to escape from the vicious gang he encounters many strange characters who either help or hinder him. When Trip takes LSD, he is visited by the Silver Rider, who helps him get away by creating a decapitation trap.

Kari Väänänen
as Darling
View All

There are no critic reviews yet for Iron Horsemen. Keep checking Rotten Tomatoes for updates!

There are no featured audience reviews yet. Click the link below to see what others say about Iron Horsemen!