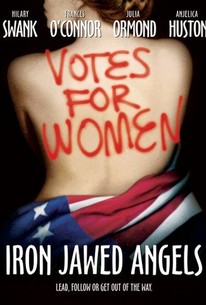 German filmmaker Katja von Garnier directs the HBO original movie Iron Jawed Angels, inspired by a pivotal chapter in American history. Hilary Swank plays Alice Paul, an American feminist who risked her life to fight for women's citizenship and the right to vote. She founded the separatist National Woman's Party and wrote the first equal rights amendment to be presented before Congress. Together with social reformer Lucy Burns (Frances O'Connor), Paul struggled against conservative forces in order to pass the 19th amendment to the Constitution of the United States. One of their first actions was a parade on President Woodrow Wilson's (Bob Gunton) inauguration day. The suffragettes also encountered opposition from the old guard of the National American Women's Suffrage Association, Carrie Chapman Catt (Anjelica Huston). The activists get arrested and go on a well-publicized hunger strike, where their refusal to eat earns them the title of "the iron-jawed angels." Iron Jawed Angels was screened at the Sundance Film Festival in 2004 before its television premiere on HBO.

Iron Jawed Angels relies on a disappointingly conventional script, one that delivers stock characters who have no dimensionality, and simplistic plot abbreviations that you'd find in a high school textbook.

The film celebrates freethinkers who made huge personal sacrifices to wage a critical battle for human rights, yet it does so by bowing to commercial orthodoxies and the meekest modern notions of womanhood.

Gussied up with a comically anachronistic use of period music on the soundtrack and flashy, MTV-style montage sequences, pic misguidedly strives - but ultimately fails -- to belie its instincts as an assembly-line movie-of-the-week.

It's a reminder that feminism is first of all about human rights.

Iron Jawed Angels is an important history lesson told in a fresh, and blazing fashion.

It's good to be reminded in an election year how hard and long women fought to win the vote.

Director Katja von Garnier's use of tricksy camerawork and modern-day music is rather jarring. But the script, if a little on the wordy side, is smart and sassy, and the performances are uniformly excellent.

Despite the film's anachronistic approach -- fast-tracking camera tricks and a soundtrack pulsating with contemporary musical numbers -- there's a lot to appreciate in Katja von Garnier's classy precursor to the recent (and less effective) "Suffragette."

Interesting, but its style is too muddy.

Strong, powerful story, it blew me away. I think it's a must see for everyone. I already know the answer to this question but why don't we learn about THIS in history class? I feel like I had no idea the depths of the struggles of the woman's suffrage movement until I saw this movie.

This is a really well-made film about the fight for suffrage in the U.S. with fine acting by a great cast, and nice direction to boot. The soundtrack iis anachronistic, but it works well, so I have no problem with it, even though it adds historical innacuracy. This was an HBO production, and it helps that it was too. I sadly have to admit that this film would have tanked had it been a big budget Hollywood affair. If you can track it down, watch it. This film captures important events that ALL Americans need to see and know about.

[font=Century Gothic]"Iron Jawed Angels" starts out in 1912, as two suffragists return to America from England - Alice Paul(Hilary Swank) and Lucy Burns(Frances O'Connor) - and petition the women's central committee to organize and fundraise in Washington, DC. Even though the older generation is wary of the methods of the English suffragists(which included brick throwing), the committee grants permission. Once in the capital, Alice and Lucy organize a march which seemingly goes badly but also gets the activists lots of sympathetic press and an audience with President Wilson(Bob Gunton).[/font] [font=Century Gothic]"Iron Jawed Angels" serves as a valuable history lesson about the suffrage movement.(It is still timely. And even ninety years later, the Democrats are still useless.) I was surprised to realise how little I knew. The movie is not without its faults, though. The film's flashy style clashes with the period in which it is set.(It is best not to speed things up in a time when movement was remarkably slower.) It gets off to an awkward start but ends strongly.(Considering the large amount of ground to be covered, it might have been best to concentrate on the second half of the story.) And a misbegotten romantic subplot does not help.[/font] [font=Century Gothic]The cast including Anjelica Huston, Julia Ormond, Molly Parker, Brooke Smith and Vera Farmiga is excellent with O'Connor and Parker being standouts.[/font] [font=Century Gothic]I realize how brave the suffragists were especially with the misogyny they faced but...I still have to ask: did they go far enough? This was a time when Mother Jones and Emma Goldman were organizing and agitating even without the right to vote. [/font] Basically, the right to vote should be seen as a step, not the end of a movement.