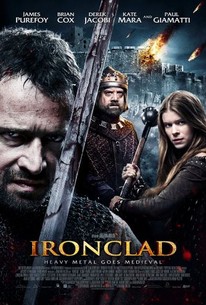 Critics Consensus: Ironclad serves up plenty of crunchy gore to sate action aficionados, but the sketchy story clunks like a suit of ill-fitting armor.

Critics Consensus: Ironclad serves up plenty of crunchy gore to sate action aficionados, but the sketchy story clunks like a suit of ill-fitting armor.

Critic Consensus: Ironclad serves up plenty of crunchy gore to sate action aficionados, but the sketchy story clunks like a suit of ill-fitting armor.

A ragtag group of Knights Templar hold out for months against the hard-fought siege of Rochester Castle in the thirteenth Century. Set in the time of King John's signing of the Magna Carta treaty, the group struggles against the King to defend the freedom of their country. "Judging from James Purefoy's bloody sword, the movie Ironclad is going to be a bloody feast! Well at least it will be somewhat historically accurate because the Siege of Rochester Castle was a damn bloody mess, a really hard-fought battle." -- (C) Arc Entertainment

Ironclad is as weighed-down as it sounds.

The problem is that the movie is only swords and stage blood. The suits of armor are all empty.

As a critic who complains about painless and brainless action movies, I hoist a glass of mead to the men and maidens of "Ironclad."

The core fan base of this English sword battle drama will pay for the boundary-pushing blood and gore. Why bore them with things like plot and context and production values?

Terrific action spectacle and a great tattered and beaten performance from Paul Giamatti, but the film is largely lifeless and dull.

Most of the movie is so bland and has such a lack of passion for characters or story that it makes you wonder why anyone cared enough to make it.

James Purefoy's Marshal is still bound by his Templar oaths, but will he be able to preserve his vow of chastity when Kate Mara's lady of the castle starts fondling his great big Templar sword?

What saves the flick is Paul Giamatti's John, played as a petulant, damaged man born in a world where he wields the power of a god and inevitably rages as that power is snatched away.

Good gravy, if you're looking for satisfyingly bloody swordplay, look no further.

20 guys in a castle in England try to hold off the rampaging hordes of Danish mercenaries (let's stop and simply enjoy the pairing of those two words. "Danish" + "Mercenary" ... admit it, you never thought of it before, did you? I certainly never did!) under the authority of good ol' King John, the go-to bad guy whenever the eleventh century is brought to mind. Sort of an English Thermopylae, this one has it's moments. Most of them are taken up by Paul Giamatti as King John, who can play bad guy in his sleep and scare you.

Too dark, too bloody, too long.

Based around the real events of 1215 when powerful Barons of England grew tired of their King and came together to rebel against his rule. This film tells the story of the siege that took place at Rochester Castle in the County of Kent following King Johns decision to break the agreement of the Magna Carta made by himself and the Barons of England and then attempting to regain England for himself. The film focuses mainly on the battle that took place between the Loyalists of King John and the Barons with whoever they could muster against the strong King. Now I must say straight away that you can't expect the film to be completely accurate and it isn't, but for an independent film mainly British made with US assistance this is a very good and fairly accurate attempt. There are some issues I believe with the historical facts such as the French being involved before the siege at Rochester, the fact that King John actually did take the castle in the end (pretty big mistake there methinks) and I don't believe there were any Danish mercenaries involved at anytime, not sure about Knights Templar's either. So God knows where they came up with that idea for the film and lastly King John was simply a bad king and not a bad person really, this siege was really part of a civil war which turned from a cause of 'more power to the people' to simply a scuffle for the throne and power by the Barons. Of course the film has been taken down the Hollywood route I'm afraid, think 'BraveHeart', 'Pathfinder' or 'Centurion' etc...and you know exactly what I mean, the film is wonderfully made and shot but there are elements included purely to make the story more enticing to a modern audience. Now although this isn't a Ridley Scott flick they have tried their best to go down that epic route, all the action is hand held cams that shake all over the show to add that feel of raw blood n sweat in the heat of battle which does work. There is plenty of claret spraying n squirting from lopped off limbs and slashes to satisfy the goriest of mindsets and some good catapult action all set on location within Wales to give an excellent murky representation of gloomy medieval England. The action looks good and its fast n fluid but there are hints of slightly amateurish shots here and there along with examples of basic acting from the extras in battle. If you look closely there aren't that many men in the battles (clever editing) and they aren't going at it hammer n tongs if you get me. Also I should add a few shots using CGI, mainly of the castle, are a touch obvious but nothing too horrific. The main issue I had was the typical Hollywood approach of having a band of guys all brought together with the usual 'Hollywood recruit' sequence. Each man being of different build and skill, one guy is a strong big fat bearded 'Little John' type, another is common mouthy and devious, another is a top archer, another is just a young lad, another is good with knives and women and of course the hero is a Knights Templar who is an all round kick ass machine. Its just a bit too flash and silly really, of course they need characters the viewer can relate to and cheer for but its almost like a computer game roster for a 'hack n slash' fighter. Great performances from a very good line up including Giamatti giving a good slimy side to his character despite the fact that King John wasn't really 'a bad guy', Dance is perfect as usual as is Jacobi and Cox again cast as a gruff leader/soldier. Purefoy does whats needed as the strong heroic knight but little more, Mara is cute as a button whilst playing scared and innocent, Crook fits the part for the era with his malnourished appearance, Aneurin Barnard is actually very good as the young lad 'Guy' and also looks like a certain Hobbit. Finally add to that a couple of cockneys in Jamie Foreman and Jason Flemyng for that typical dirty, gritty, uniquely common English touch. Like history? like a wee bit of action hokey pokey? then this is for you, just try to ignore the bits of cinematic popcorn excess .