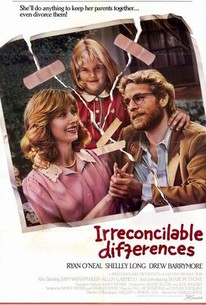 In this human-scale drama/comedy, a pair of Beverly Hills parents, Albert (Ryan O'Neal) and Lucy (Shelley Long) first come together as a couple interested in writing (she) and teaching (he), but Albert's life takes an upscale turn when he starts both writing and then directing in Hollywood. As he becomes successful, Lucy is forced to burrow into her own writing in self-defense, and after her book is well-received, she is compensated a little for Albert's lack of attention and philandering. After Hollywood and its well-known flaws are sketched out in the increasingly strained marriage, the story reaches its primary focus: Albert and Lucy's 9-year-old daughter Casey (Drew Barrymore) talks to a lawyer because she wants to sue her parents for divorce. She gets no hugs or affection, and precious little attention, and she would prefer to go live with the maid. Given the parents' celebrity, the case receives wide press -- and the family begins to reconsider where it is going and why. Although a bit long, especially in the first half which wanders off course a little, the story is engaging enough (especially for Hollywood buffs) to balance any weaknesses.

Mark May
as Reporter

Lauren Hartman
as Woman on the Street

Ida Random
as Woman at Party

Steffen Zacharias
as Man at Party

Verna Cornelius
as Englishwoman at Party

Irv Meyers
as Man in Bar

Irving Meyers
as Man in Bar

William A. Fraker
as Cinematographer

Minnie Lindsey
as Inez
View All

Irreconcilable Differences is sometimes cute, and is about mean parents, but it also is one of the funnier and more intelligent movies of 1984, and if viewers can work their way past the ungainly title, they're likely to have a surprisingly good time.

There is a marvelous balance in that we have an equal rooting interest in each of the main characters. It isn't a mere satire.

I had much more sympathy for the child in the film and, sadly, she takes a back seat.

We like these people even as they sink further and further into a black hole, and we root for their sensible, level-headed, uncommonly mature daughter to set them straight.

Love this! I wish kids really did take their parents to court for neglect.

This fantastic drama gives you a new look on divorced families. It has a great cast, and it's also a bit funny too. I love it, and I highly recommend it.

Movie about a little girl who sued her parents for divorce. Drew is very sweet.