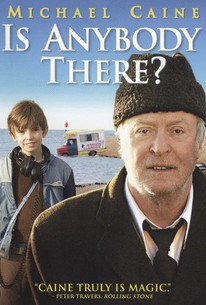 Critics Consensus: Though Michael Caine gives an excellent performance, Is Anybody There? features a cliche-filled story that ultimately falters.

Critics Consensus: Though Michael Caine gives an excellent performance, Is Anybody There? features a cliche-filled story that ultimately falters.

Critic Consensus: Though Michael Caine gives an excellent performance, Is Anybody There? features a cliche-filled story that ultimately falters.

Is Anybody There? Photos

Set in 1980s seaside England, "Is Anybody There?" tells the story of 10-year-old Edward whose parents have turned their house into a retirement home. While his mother struggles to keep the family business afloat and his father copes with the onset of a mid-life crisis, Edward becomes increasingly obsessed with the ghosts and afterlives of the residents when they die. Edward's is a lonely existence until he meets Clarence, the latest arrival at the home, a retired magician and grieving widower who refuses to give in gracefully to old age. Their relationship begins at odds until Clarence notices that the boy is growing up even more fitfully than he is growing old. As they begin to face life together, Clarence comes to terms with his past, Edward tames his obsession with the unknown and they are both reminded of what magic is possible when life is lived to its fullest.

Edward Lees
as Ben
View All

News & Interviews for Is Anybody There?

View All Is Anybody There? News

Critic Reviews for Is Anybody There?

All in all, too many flaws converge to make this other than a predictable and maudlin disappointment, and that's about it, really.

Profoundly (and some would say pleasurably) formulaic, the film possesses scant cinematic energy, relying wholly on the familiar transformation of a grumpy old man into an infectiously weepy humanist.

The talent and craftsmanship of "Is Anybody There?" is ample, but it remains uncertain whether there's anybody here still interested in this all-too-familiar story.

Even when dealing with the supernatural, Caine is never less than a realist. Yet you can still see the boy in him. And in Milner, you can certainly see the man Edward will become.

It's a film that serves as a poignant reminder of how quickly time passes.

Weighed down by a surrounding air of quirkiness.

Crowley's fatal flaw here is a fear of painting the old folk's home as too grim, even as he strives at every turn to milk sentiment from death and dying.

IS ANYBODY THERE? -- They certainly are. This is pure Oscar gold in the shape of a heart.

Is Anybody There? devolves into a predictable yarn about a boy and a grandfatherly figure - but adding Michael Caine to the mix means it's still worth your while.

Warmly lit and beautifully acted, but cynical enough %u2013 and chock-full of enough dark humor %u2013 to avoid what might have been unbearably schmaltzy.

Like a good number of films, 'Is Anybody There?' is saved from being a routine offering by the presence of Sir Michael Caine.

Audience Reviews for Is Anybody There?

Clarence: Now for those of you who have never before sat in a seance, there is absolutely nothing to be fearful of. Ghosts... are very friendly sorts. I'll start by saying I got absolutely no enjoyment from watching Is Anybody There? outside of the central performance from Michael Caine. When Michael Caine can give a performance like this, and still not lift a movie over the hill, that is saying something. Caine is one of my favorite actors of all-time, so I'll watch anything he's ever been in. I mean I watched The fucking Swarm for godsakes. Is Anybody There? never gets anywhere in my opinion. It's predictable and annoying. The little kid in this one rivals any kid in movie history for me on the annoyance level. He's right there with that little fucker from Sleepless in Seattle. And when there's an annoying kid in a film, it just ruins the whole experience for me. He's the type of kid you just want to punch in the face. Edward is growing up in a nursing home which his parents run. By seeing a lot of death early on in his life, he has grown obsessed with death and the afterlife. He has ghost drawings hanging on his wall, and he spends his time trying to talk to the spirits in his house. Clarence shows up to take a room in the nursing home, and although the two start off on wrong terms, the two quickly become friends. I wasn't really buying the whole friendship in this one. I thought it was poorly developed, and didn't resonate the same power as say the friendship between characters in a movie like Secondhand Lions. Overall, I was fairly unimpressed by everything that was going on in this one. I found very little to take away from it, other than more reassurance that Caine is one of the best actors ever. It's a rather boring, dull, and uneventful film.

Michael Caine's gift of a performance as a lifelong ladies man finally and miserably alone at the end of the line (and whatever ruminations you yourself might be inclined to ruminate on regarding the subject of waiting to die) is the draw here. There's a secondary plot about a youth's sad and forlorn coming of age in a retirement home, and how these two oddballs come to save each other.

A brilliantly profound yet sad film with a great cast. It truly touched me and although the story was fairly predictable it was Caine that made the character. Despite his bad actions you still felt for him as he was genuinely sorry for what he did. The themes they explored were difficult to watch. Incredibly sad and I think I'll only watch it if I feel sad already.

A ten-year-old boy growing up in a nursing home run by his parents questions the great mysteries of life and death with the help of a kindly, though troubled, resident. I read multiple reviews of this film describing it as "little," or otherwise diminutive, but just because it is an independent film, I don't think it's not ambitious. In fact, I almost think that the inclusion of themes of death, redemption, loss, memory, and troubled childhood makes this film too ambitious, as though it might have bitten off more than it can chew. However, Jon Crowley's direction provides a sturdy hand to a potentially unsteady ship. It occasionally wanders into a side plot, but Crowley makes every effort to keep us primarily interested in the boy's journey rather than the supporting characters'. The film's highlight is Michael Caine's performance. He is amazing as the sometimes bitter, sometimes regretful, sometimes entertaining aging resident. Caine's tears seem as natural as his charm, and he once again proves that he can bring his A-game to a script that properly utilizes his talents. Overall, Is Anybody There may wander and may push the envelope too far, but it is ultimately worth watching.

Is Anybody There? Quotes