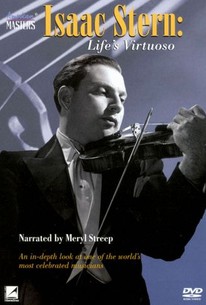 The year 2000 represented two major anniversaries in the life of the great violinist Isaac Stern: his 80th birthday and his 40th year as president of Carnegie Hall, the venue that he helped save from imminent demolition in the 1960s. Isaac Stern: Life's Virtuoso commemorates these and other remarkable accomplishments, including Stern's participation in cultural exchange programs with China, Germany, and the Soviet Union; his political involvement in Israel; and his devoted mentorship of young musicians. Commentary by the likes of Henry Kissinger, Shimon Peres, Itzhak Perlman, Yo Yo Ma, Zubin Mehta, Jean-Pierre Rampal, Daniel Schorr, and Gregory Peck is spliced with performances that showcase Stern's incomparable artistry. Rare archival footage and touching clips from home movies complete this portrait of a truly remarkable figure.

There are no critic reviews yet for Isaac Stern: Life's Virtuoso. Keep checking Rotten Tomatoes for updates!

There are no featured reviews for Isaac Stern: Life's Virtuoso at this time.