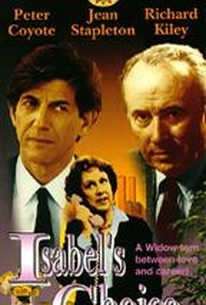 Isabel (Jean Stapleton), a widowed executive secretary, is forced into early retirement by executive Lymon Jones (Richard Kiley), whom she herself trained. Actually, Jones has an ulterior motive; he's fallen in love with Isabel, and wants to marry her. Now Isabel must choose between Jones or keeping her job in order to train Jones's successor Peter Coyote. For her work in Isabel's Choice (working title: A Life of Her Own), Jean Stapleton won an award from the National Commission for Working Women. The made-for-TV film was first telecast December 16, 1981.

There are no critic reviews yet for Isabel's Choice. Keep checking Rotten Tomatoes for updates!

There are no featured reviews for Isabel's Choice at this time.