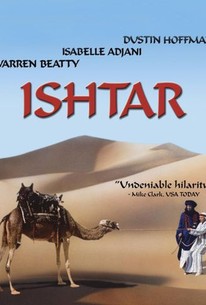 Critics Consensus: Warren Beatty, Dustin Hoffman, and laughter itself get lost in the desert during a flawed spoof of classic road movies that proves ill-suited for its mismatched and miscast stars.

Critics Consensus: Warren Beatty, Dustin Hoffman, and laughter itself get lost in the desert during a flawed spoof of classic road movies that proves ill-suited for its mismatched and miscast stars.

Critic Consensus: Warren Beatty, Dustin Hoffman, and laughter itself get lost in the desert during a flawed spoof of classic road movies that proves ill-suited for its mismatched and miscast stars.

Ishtar has taken on a life of its own, infamous for the $40-million production cost, with Director Elaine May being compared to Eric Von Stroheim in terms of legendary extravagance resulting in costly overruns. The movie was mercilessly panned and declared one of the biggest box-office disasters of the 1980s, though the feature is not that bad, just not as funny as it could have been. Lyle Rogers (Warren Beatty) and Chuck Clarke (Dustin Hoffman) are two hopelessly inept but forever hopeful New York tunesmiths. With the help of agent Marty Freed (Jack Weston), the two get a gig at the Chez Casablanca in Morocco. After their arrival, the duo is entangled in the political chaos that plagues the region. Lyle and Chuck try to write inspired songs -- that are hilariously bad -- but they never give up the hope of penning a hit. CIA agent Jim Harrison (Charles Grodin) recruits Chuck to work for the agency, while femme fatale Shirra Assel (Isabella Adjani) gets Lyle to help do her bidding. Chuck and Lyle wander aimlessly in the desert on a blind camel as they become the targets of an accelerated manhunt. International spies gather with vultures in hopes of catching the singing saps. There are shades of the Bob Hope and Bing Crosby "Road" films here, but the overall results are uneven. Coupled with the budget problems and the high public interest of a film with both Hoffman and Beatty, the feature was viewed at the time as a disaster -- as well as becoming a box-office flop. Compared to Kevin Costner's costly flop Waterworld, however, this film is much better on all levels.

Fred Malamed
as Caid of Assari

Fred Melamed
as Caid of Assari

The film fails at every level.

It is a smart, generous, genuinely funny affair. Sometimes, like the camel who almost ambles away with the picture, it's longish in the tooth, but it is based on an extremely astute vision of life.

Ishtar is a good movie, but you can't help but wonder if, lurking somewhere in those cans of outtakes, there isn't a great movie, too.

This Elaine May comedy was the most underappreciated commercial movie of 1987. It isn't quite as good as May's previous features, but it's still a very funny work by one of this country's greatest comic talents.

Though far from a masterpiece, the movie is often hilarious in a sly, seemingly improvisational way.

It seems too many people participated to save the unsalvageable. [Full Review in Spanish]

There are three or four memorable sequences in Ishtar -- the purchase of the blind camel, the use of fake Arabic in an auction scene, and the first horrendous singing performance of stupid songs. But the film lacks pace and consistent tone.

Ishtar is cute, reasonably pleasant entertainment, but no motion picture oasis for Hoffman, Beatty or their fans.

Beatty goes along with the casting joke of playing the nerd sidekick to Hoffman's slick loverboy. But zany antics aren't his forte. Hoffman's impishness serves the film better until the sheer weight of the production grinds him down

One of the grossest miscalculations of the blockbuster era.

An incredible box office loser and, to be frank, far from great, Ishtar is still not nearly as awful as many would have it.

Funny... I would watch it again.

Not as bad as it's reputation; It's just NOT funny.

Recognized as one of the worst movies of all time. And it is!! But hilarious (in a head-scratching way) because of how bad it is.

It's nowhere NEAR as bad as they say -- how could it be?