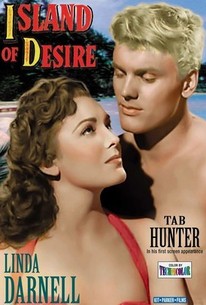 As directed by Stuart Heisler (The Glass Key) and produced by David E. Rose, this slick and glossy, Technicolor-drenched romantic melodrama stars two onetime screen heartthrobs, Linda Darnell and Tab Hunter. She's a nurse, Elizabeth Smythe, and he's a Marine corporal, Michael "Chicken" Dugan; the pair wind up stranded on a tropical isle following the explosion of a military ship in the Pacific. For some time, Michael and Elizabeth find themselves at odds, and spend lengthy periods quarreling, but romance eventually blossoms and the two fall in love. Unfortunately, that romance soon hits the rocks given the arrival of a third party on the isle, a gravely injured RAF pilot named William Peck (($Donald Gray}). Elizabeth nurses William back to health, and in the process, competition between the men for Elizabeth's affections grows overly fierce. This saga was originally released under the title Saturday Island but was also issued in some quarters as the more-alluring Island of Desire. ~ Nathan Southern, Rovi

Lloyd Lamble
as Officer of the Watch

Critic Reviews for Island of Desire

The wooden Tab teamed with the steamy Linda as love birds never registered as credible.

Audience Reviews for Island of Desire

Minor drama with a silly story of a pair of strangers stranded on a desert island paradise until a third party arrives and causes no end of trouble. Linda does what she can with very little and looks great. This was Tab's first film and he is extremely green but tries his best and he certainly looks like an island boy.