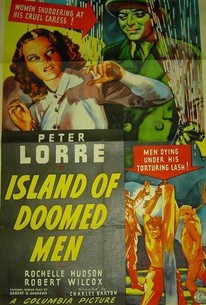 Following in the footsteps of Boris Karloff and Charles Laughton, Peter Lorre turns sadist in this routinely made but efficient little potboiler from Columbia Pictures. Lording over Dead Man's Island where he uses paroled convicts as slaves, Stephen Danel frames G-Man Mark Sheldon (Robert Wilcox) for murdering a colleague and then arranges for the convict's transfer to the island. Mark immediately becomes attracted to Danel's glamorous wife, Lorraine (Rochelle Hudson), beautifully gowned and bejeweled but like the slaves, a caged bird susceptible to her husband's rages. With the assistance of Cort (Charles B. Middleton), the two attempt to escape, but are eventually caught by Danel's spy, Brand (Don Beddoe). Happily, when all seems lost, the sadistic Stephen is killed by one of his own men, the disgruntled Siggie (George E. Stone). Although most of Island of Doomed Men was produced on sound stages, some scenes were filmed at famous Bronson Canyon in Los Angeles' Griffith Park.

Charles B. Middleton
as Capt. Cort

Bruce Bennett
as Hazen, the Guard

Forbes Murray
as Parole Board Chairman

Chuck Hamilton
as Cop
View All

There are no critic reviews yet for Island of Doomed Men. Keep checking Rotten Tomatoes for updates!

There are no featured audience reviews yet. Click the link below to see what others say about Island of Doomed Men!