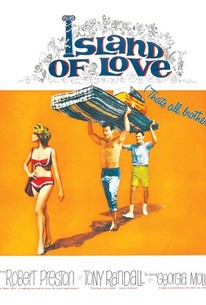 Paul Ferris (Tony Randall ) is an inebriated writer working on the next Bugs Bunny cartoon. Tony Dallas (Walter Matthau) is a gangster who pays him two million dollars to write a screenplay about Genesis starring his gun-moll girlfriend (Betty Bruce) as Eve. Paul and his buddy Steve (Robert Preston) head for the Greek islands when the film goes down the tubes. Tony goes gunning for the pair when he is stuck with the bill for the cinematic bomb. Paul and Steve help perpetuate the myth about the romantic island of Paradeisos, leading to a boom in the tourist trade that cold pay back the grumbling gangster and save their skins.

Norma Varden
as Wife in Nightclub

Critic Reviews for Island of Love

There are no critic reviews yet for Island of Love. Keep checking Rotten Tomatoes for updates!

There are no featured reviews for Island of Love at this time.