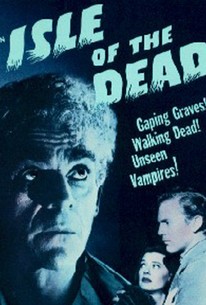 Isle of the Dead Photos

Inspired by Swiss artist Arnold Böcklin's famous painting, this seminal horror film marked the first of three collaborations between RKO producer Val Lewton and British genre star Boris Karloff. Set during the 1912 Balkan Wars, Isle of the Death featured Karloff as Greek general Pherides who, along with an American journalist (Marc Cramer), visits the gravesite of his late wife on a deserted island. They find the grave desecrated and a group of travelers held hostage by the superstitious beliefs of Kyra (Helene Thimig). One by one, the inhabitants of the island are felled by what Dr. Drossos (Ernest Dorian aka Ernst Deutsch) terms the plague, but what Kyra insists is the work of Thea (Ellen Drew), a young nurse she believes to be a "varvoloka," an ancient Greek vampire. Thea's patient, Mrs. St. Aubun (Katherine Emery), suffers from death-like trances and, sure enough, during one of her spells, she is pronounced dead by Swiss archeologist Albrecht (Jason Robards Sr. and is interred alive.

Erick Hanson
as Officer
View All

News & Interviews for Isle of the Dead

View All Isle of the Dead News

Critic Reviews for Isle of the Dead

It's better handled and directed than most though thriller fans will still find its lack of action a drag.

The film comes magnificently alive with the burial sequence, and with the zombie-like, white-robed woman roaming through shadowy galleries and shuttered rooms.

A moody and riveting piece of psychological horror that has been lovingly restored to near pristine quality.

The story's on the slender side, but haunting imagery, a few chilling moments, and a typically strong performance from Karloff compensate.

...an otherworldly experience to watch...

The Isle of the Dead reliably delivers the pleasures expected from a Val Lewton film-chief among them psychological terror based on suggestion...

There's no clear villain or monster in Isle of the Dead; rather, fear and developing paranoia drive the narrative, transforming the people on the island as they cope with their nearness to death and the causes of it.

[Proves] that even at their flimsiest, there's still no such thing as a worthless Val Lewton horror picture.

Its poetical finale comes a little too late to save it from its general dullness.

Audience Reviews for Isle of the Dead

Confused. Some nice plot kernels and plenty of great Lewton atmospherics but ... no. Too much going on here.

This one came as a complete surprise to me. Here I was expecting a schlock horror film and what do I get? A very suspenseful and thought-provoking thriller. Fantastic I say! Like most thrillers, it takes it a bit to get going, but if you perservere with a bit of patience, you'll discover your heart racing while the suspense is wound up slowly over the course of the film. You can cut the tension with a knife when the creeps start creeping in, and surprisingly, none of them from Karloff himself really. I just can't get over how effective this film was. You're bound to find this in a cheap bin at a local K-Mart or Big Lots! (which is where I found it), but it's definitely worth more than its purchase price. Pick this one up and give it a chance if you spot it.

Vampires, plague, zombies, murder? What is this movie about? And why is it so boring? Karloff is good as usual, but the story isn't up to par.

Isle of the Dead is another great movie in the Val Lewton stable of low budget but obscenely effective suspense/horror movies. It beautifully straddles paranoia, superstition and science in that trademarked Lewton wonderful world of shadows. Boris Karloff is great as a mistrusting general stuck on a Greek island to avoid a plague outbreak amonst his soldiers. The introduction of others on the island plays out almost like an Agatha Christie mystery without the conventions. The cast is great and the last 10 minutes are some of the creepiest I've seen in recent memory. Katherine Emery running around the darkness was magnificently horrifying.

Isle of the Dead Quotes