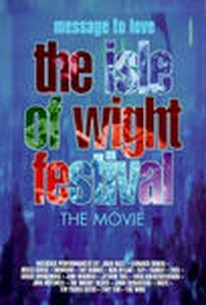 For about a year after the Woodstock Music and Art Fair in 1969, it seemed as though everyone wanted to stage a rock festival. However, The Rolling Stones' disastrous Altamont free concert (documented in the film Gimme Shelter) forever tarnished the image of the rock festival in the U.S., while in Europe, the 1970 Isle of Wight Festival was fortunately less deadly than Altamont, but nearly as controversial. Staged by two men with greater ambitions than practical experience (not unlike Woodstock), the festival was held on a small island off the British coast, where some of the finest rock talent of the day -- Jimi Hendrix, The Doors, The Who, Miles Davis, Joni Mitchell, Donovan, Jethro Tull, Joan Baez, Leonard Cohen, and Kris Kristofferson, among many others -- were scheduled to play over the course of five days. But while at Woodstock no one had given much thought about keeping gatecrashers out, at the Isle of Wight those without tickets were greeted with corrugated steel fences that sealed off the festival grounds. Huge numbers of visitors simply camped on hills surrounding the grounds, while others broke down the fences by force after refusing to pay the three pounds admission. This led to heated conflicts between the promoters (who railed bitterly against the audience from the stage), the festival's security staff (who had to deal with the many gatecrashers), the concert-goers (who were upset with both the admission price and the site's facilities, one spectator calling it "a psychedelic concentration camp"), and the performers (who had to deal with unruly audiences and the prospect of not being paid). It was estimated that 600,000 people attended the festival, but less than 50,000 actually paid to get in, spelling financial ruin for the promoters. American documentary filmmaker Murray Lerner brought a crew to record the festival on film, but thanks to the festival's bad publicity and uneven reviews, he was not able to obtain completion funds for the project until 1995, hence the presence of many musicians who had since passed away, such as Jimi Hendrix, Jim Morrison and Miles Davis. Message to Love: The Isle of Wight Festival examines the concert both on-stage and behind-the-scenes, capturing performances from many of the artists who appeared. We see Joni Mitchell and Kris Kristofferson angrily confronting the rowdy crowd, and The Who at the peak of their form (their full set was released as a separate film), alongside the numerous catastrophes and conflicts that dominated the festival's five days. ~ Mark Deming, Rovi

Critic Reviews for Isle of Wight Festival: Message to Love: 1970

...an important anthropological and historical record of a moment in our cultural history

Audience Reviews for Isle of Wight Festival: Message to Love: 1970

There are no featured audience reviews yet. Click the link below to see what others say about Isle of Wight Festival: Message to Love: 1970!