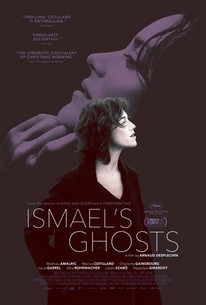 Critics Consensus: Ismael's Ghosts unites an excellent cast -- and their valiant efforts are often enough to counter its somewhat confused and disjointed story.

Critics Consensus: Ismael's Ghosts unites an excellent cast -- and their valiant efforts are often enough to counter its somewhat confused and disjointed story.

Critic Consensus: Ismael's Ghosts unites an excellent cast -- and their valiant efforts are often enough to counter its somewhat confused and disjointed story.

Twenty-one years ago, she ran away. And twenty-one years later, Carlotta (Marion Cotillard) is back from the void. But Ismael (Mathieu Amalric) has been busy rebuilding a life for himself with Sylvia (Charlotte Gainsbourg) and working on his next feature film. As Ismael's trials and tribulations unfurl, so too do those of his film's protagonist: the idle, funny and reckless diplomat Ivan Dédalus (Louis Garrel). The character is a nod to the ghost of another of Desplechin's creations, the brother of Paul Dédalus, three-time hero of "My Sex Life... or How I Got Into an Argument," "A Christmas Tale" and "My Golden Days." A film within a film--and then some, Desplechin layers narrative upon narrative. With ISMAEL'S GHOSTS, Desplechin returns once more to the past, creating film after film as his way of stepping back in time, and proving yet again that his brand of genius lies in his ability to find light in the darkest of places.

Unfortunately all the metafictional layering only highlights the lack of engagement at the center of the story, the three stars acting up a storm but barely acknowledging each other.

Decked out in the classy colours of the high-end French art film, Ismael's Ghosts is probably easier to enjoy if you make no attempt to fit its disjointed units together.

Like one of the thin-skinned, self-sabotaging protagonists that inhabit his films, director Arnaud Desplechin takes a promising premise and turns it into a spiralling vortex of shouty navel-gazing.

This director's cut might smack of self-indulgence, but it also says much about love and loss and the language of an artform that flirts with realism while remaining an illusion.

It's rarely boring, but golly it's indulgent.

The film, like Ismael, cannot escape its own self-indulgent tendencies, leading to an experience that never coalesces into something that feels all that insightful, despite some fine acting and moments of wit and mystery.

Ismael's Ghosts is several movies each with their own merits, but that doesn't mean that they coexist amicably.

Deliciously self-reflexive and touching, Ismael's Ghosts is another great testament of Desplechin's unique talent as a film enthusiast and a great writer.

EVERYONE is very good in the movie they find themselves in... there are just so many damned movies crammed into Ismael's Ghosts.

In spite of its admirable storytelling ambition and the obvious craftsmanship at play, Ismael's Ghosts does feel schizophrenically busy at times and proves ultimately unsatisfying as it fails to drive home the many questions it successfully raises.

Both he (Ismael) and the film deteriorate in front of our eyes in spectacular fashion, the hand that holds the threads begins to feel less steady as the filmmaker loses his grip on what is reality and what is fiction.

There are no featured audience reviews yet. Click the link below to see what others say about Ismael's Ghosts (Les fantômes d'Ismaël)!