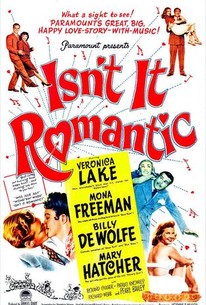 One of the more popular movie-review paperbacks sums up Paramount's Isn't it Romantic? with a terse "No." There's actually more to the film than that, but not much. Set in Indiana in the 1890s, the story revolves around an diehard Confederate soldier named Major Euclid Cameron (Rolan Culver), who refuses to acknowledge that the South lost the Civil War. Cameron also regards himself as an aristocrat who will never sully his hands with work, which is why he and his family are flat broke. It is up to the Major's three pretty daughters-Candy (Veronica Lake), Susie (Mona Freeman) and Rose (Mary Hatcher)-to make ends meet financially, even if it means marrying for money rather than love. Pearl Bailey transcends the stereotypical role of the Cameron's housekeeper Abigail with her soulful renditions of such forgettable tunes as "I Shoulda Quit When I Was Ahead" (a bit of advice that could have profited the film's producers!)

Critic Reviews for Isn't It Romantic?

A formless and rambling musical, which looks as though it were made with at least a half dozen previous musical successes in mind.

Isn't It Romantic isn't. It's a seldom diverting mixture comedy and songs that misses.

A mild musical which doesn't quite come off.

The idea is to give the wholesome nostalgias of small-town U.S. life a coat of sophisticated varnish and, if possible, a new lungful of life. As it turns out, the picture smells more of varnish than of fresh air.

The presence of such pleasant players as Veronica Lake and Mona Freeman, among others, fails to offset the heavy-handed horseplay of a trite and tedious filmusical.

There is little to recommend in this botched-up mixture of comedy, music, and drama.

Action is lively, oldtime songs are well sung and the costumes and settings are above average.

There are no featured reviews for Isn't It Romantic? at this time.