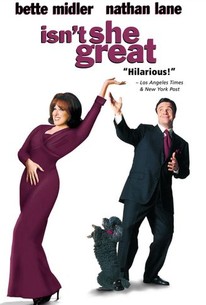 Jacqueline Susann spent a long career on the edges of show business as an actress and model, but it never really paid off until she quit acting to write her first novel. Valley of the Dolls was a proudly sleazy potboiler that sold 26 million copies and had readers wondering which characters matched up to which real-life show-biz figures. Susann wrote several other successful novels, but fame and fortune didn't make her life any less tumultuous; she had well-publicized problems with drugs and alcohol and a series of free-wheeling affairs, although she stayed with her husband Irving Mansfield until her death in 1974 at the age of 56. Isn't She Great is a screen biography that focuses on Susann's roller-coaster literary career, with Bette Midler as Susann and Nathan Lane as Mansfield; David Hyde Pierce, Stockard Channing, John Cleese, and Sarah Jessica Parker round out the supporting cast.

Brett Gillen
as Man with Bicycle

Maurice Carlton
as Orderly No. 1

Edward B. Goldstein
as Eddie In Lindy's

Mickey Toft
as Guy at 6

Carl Alacchi
as Orderly No. 2
View All

Critic Reviews for Isn't She Great

The most notable aspect of this trashy (but unenjoyable) biopic of Jacquleine Susann, Valley of the Doll's best-selling author, is its running time (93 minutes); Bette Midler and Nathan Lane give two of their worst and broadest performances.

The filmmakers don't know what to make of their overblown subject.

Neither Midler nor director Bergman are able to navigate the queasy shifts from camp cartoon to bathos, as Susann sputters in denial over her cancer and autistic son.

The movie is a stinker, but it's not an enjoyable stinker.

Every joke and every scene collapses and blows away before it's finished.

gives its heroine all the rough edges of a throw pillow... Susann couldn't write sentiment convincingly and neither can Rudnick.

The movie's supporting characters are barely worth notice.

Bergman, whose comic timing can be brilliant, is way off his game this time.

Isn't She Great is a fatal blend of soppy bathos and wacky humor.

Probably a bad idea from the beginning, and nothing in this movie convinces us otherwise.

Audience Reviews for Isn't She Great

Interesting for the pop culture history but otherwise not so great.

Not the screaming camp-fest I expected. Most of the time I was feeling really bad for Jaquie. The best scene was when she cracked it at God.