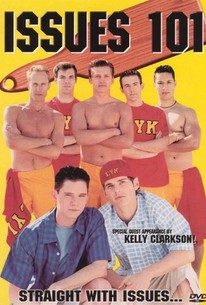 Directed by John Lincoln and screened at the North Carolina Gay and Lesbian Film Festival, Issues 101 centers around a fictional Southern California college and its Greek community. When Joe, an incoming freshman, mistakes an invitation to a fraternity rush party as a date, he inadvertently stirs up a bevy of controversy with the brothers. He quickly becomes caught between two members -- one is openly gay, the other is described as "straight with issues" -- and their relationships are put on display when Joe, who has been out of the closet for years, runs for student body president. Issues 101 features Michael Rozman, Dennis W. Rittenhouse Jr., and Jeff Sublett, and includes a cameo appearance from American Idol winner Kelly Clarkson.

Tawna Hutchinson
as Sandy
View All

There are no critic reviews yet for Issues 101. Keep checking Rotten Tomatoes for updates!