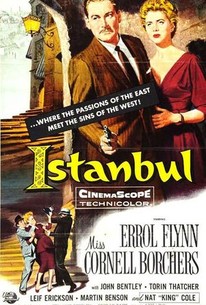 In this adventure, a remake of Singapore (1947), a hero finds a bracelet containing 13 precious gems while visiting Istanbul. He soon finds himself pursued by covetous crooks who want those jewels. He is then deported by the Turkish authorities, but not before he has time to hide the bracelet in a hotel. Five years later, the man returns to seek out the stones. Again he is pursued by both authorities and criminals. He must also contend with the reappearance of his wife whom he thought had burned to death on their wedding night. She lived but suffered amnesia. She then remarried. Nat "King" Cole sings "When I Fall in Love".

George Calliga
as Headwaiter
View All

There are no critic reviews yet for Istanbul. Keep checking Rotten Tomatoes for updates!

Handsomely produced by ordinary drama from the late portion of Flynn's career. The highlight is a few musical performances by the great Nat King Cole which far outclass anything else in the film.