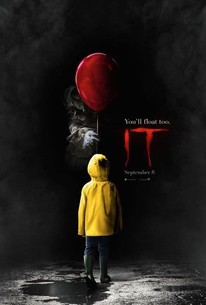 Critics Consensus: Well-acted and fiendishly frightening with an emotionally affecting story at its core, It amplifies the horror in Stephen King's classic story without losing touch with its heart.

Critics Consensus: Well-acted and fiendishly frightening with an emotionally affecting story at its core, It amplifies the horror in Stephen King's classic story without losing touch with its heart.

Critic Consensus: Well-acted and fiendishly frightening with an emotionally affecting story at its core, It amplifies the horror in Stephen King's classic story without losing touch with its heart.

New Line Cinema's horror thriller "IT," directed by Andy Muschietti ("Mama"), is based on the hugely popular Stephen King novel of the same name, which has been terrifying readers for decades. When children begin to disappear in the town of Derry, Maine, a group of young kids are faced with their biggest fears when they square off against an evil clown named Pennywise, whose history of murder and violence dates back for centuries.

Anthony Ulc
as Joe the Butcher

Isabelle Nélisse
as Girl in Bathroom

Jocelyn Mattka
as Another Girl

News & Interviews for It

View All It News

Critic Reviews for It

The serious dramatic themes ring hollow, however, leaving only the paperback boogety boogety to justify the Oscar-bait running time.

The film depends - and succeeds - entirely on the strength of their performances, and for two hours that speed by all too quickly, it's not too much of a stretch to feel like we're on summer vacation with them.

It sticks with you to haunt and influence your nightmares!

It's well-executed, marvelously acted, and has a few scary sequences. It also has just as many that are not, as well as a wobbly command of tone and trouble sustaining its own momentum.

But while It is a good film that is skilled at recreating its milieu, it also made me a little sad. Boys get all the good nostalgia pieces.

The production, the performances, the visuals, the story, the horror, and everything else gels together into one of the best Stephen King movies ever made.

A freaky reboot with creepy moments.

[Stephen King] always develops those like coming-of-age characters really well and I totally think that they hit the mark the casting was perfect.

A tad too long but makes up for its indulgent length with handsome production design and solid performances from the kids, especially Lieberher and Lillis.

IT proves remakes can easily make a name for themselves, improving on the old but creating an entirely new frightening, fun time.

Audience Reviews for It

A little long, but I liked it. Child cast did a really good job at portraying the characters in the novel. Penny wise was a little more hammy than expected, though.

I'll preface this review by saying I am no fan of Stephen King, I find many elements of his stories random and borderline nonsensical, and this one is no exception. However, the screenplay, direction, and great performances from the kids, particularly Finn Wolfhard, help this movie float. Horror films need to be more than jump scares to be good, and this one is accompanied by a good moral of growth, facing your fears, and has a good amount of humor to make for a really good movie.

When it comes to horror flicks, we have seen more haunting and outrageous things in recent years. There are a few jump scares and some scenes are wonderfully unpleasant, but not without a sick little twist of humor every now and then. Pennywise works most of the time, as well. The film really soars in his portrayal of teenage friendship, though. The kid actors are all around great, making for likable yet unlikely heroes. A very entertaining King adaptation, already a smash hit that will find its deserved continuation.

The gist here is that the figure of evil is not quite so interested simply in your demise, per se, which would be one thing, but rather in how well it can scare the living daylights out of you before, er, your demise. In that regard the film succeeds quite well. Especially interesting is how the characters all have enough troubles to want to quit Maine entirely even before they meet the please-don't-come-any-closer clown, and no one would judge them. But they have a decision to make ultimately, and on that decision the film turns: to work together as a team or no, problems or no, distractions or no, and the work conveys the enormity of that choice in the wonderful language of adolescence. Good times at the movies.