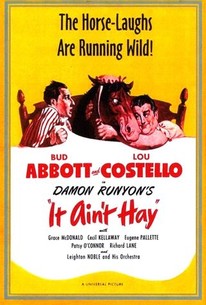 In one of their most genial comedies -- based on a Damon Runyon story -- Bud Abbott and Lou Costello have to help one friend (Cecil Kellaway) replace his beloved carriage horse, and another friend (Leightno Noble) put together a US Army camp show. Through a misunderstanding, they take what they think is a worthless nag from a racetrack stall, only to discover that they've actually stolen "Tea Biscuit," the world's greatest racehorse. Not only are the authorities after the pair -- who try to hide the horse in their hotel room -- but so is freelance trouble-shooter Eugene Pallette (who already has had one unrelated run-in with the boys), and complicating matters even further are three racetrack touts (led by Shemp Howard) who want to cash in on the mistake. Grace McDonald and Patsy O'Connor), along with bandleader Noble and the Step Brothers, provide the music and dancing in this wild romp, that takes us from New York's Central Park to the racetrack at Saratoga.

Eddie Quillan
as Harry the Horse

David Hacker
as Chauncey the Eye

Ralph Peters
as Man at Mike

The Vagabonds
as Musical Specialty

Kit Guard
as Fighter
View All

Critic Reviews for It Ain't Hay

There are no critic reviews yet for It Ain't Hay. Keep checking Rotten Tomatoes for updates!

There are no featured reviews for It Ain't Hay at this time.