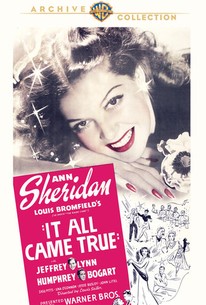 It All Came True Photos

Humphrey Bogart is a gangster again, this time as counterpoint to the comic elements of It All Came True. On the lam from the cops, Bogart hides out in a theatrical boarding house, where most of the residents are old-timers dreaming of a comeback. Amused by these offbeat characters, Bogart arranges to transform the boarding house into a nostalgia-oriented nightclub, along the lines of Billy Rose's Diamond Horseshoe. Thanks to his intervention, singer Ann Sheridan gets her big break, introducing the Warner Bros. standard "Angel in Disguise". Based on the Louis Bromfield novel Better Than Life, It All Came True is typical of the lighthearted fare in which Bogart frequently was forced to act before The Maltese Falcon allowed the actor to pick and choose his roles.

Felix Bressart
as The Great Boldini

White and Stanley
as Themselves
View All

Critic Reviews for It All Came True

Ann Sheridan has been a great surprise for us. [Full review in Spanish]

It has a winsome light touch.

Audience Reviews for It All Came True

There are no featured audience reviews yet. Click the link below to see what others say about It All Came True!

It All Came True Quotes