It Came from Beneath the Sea1955 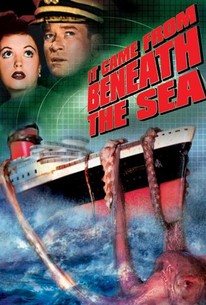 It Came from Beneath the Sea Photos

It Came From Beneath the Sea was the first of several fruitful collaborations between producer Charles H. Schneer and special-effects wizard Ray Harryhausen. "It" is a giant, six-tentacled octopus, which is galvanized into action by an H-bomb test. Worse still, the monster is highly radioactive, rendering useless the normal means of defense against it. Scientists Donald Curtis and Faith Domergue team with atomic-submarine commander Kenneth Tobey to halt the creature's progress before it begins to attack major coastal cities. Alas, the monster manages to reach San Francisco, wreaking havoc on the Golden Gate Bridge, the Ferry Building, and Market Street before Tobey figures out a way to destroy it. The stop-motion animation utilized by Harryhausen in It Came From Beneath Sea is convincingly frightening, but before long he'd top this achievement with such superb projects as Earth vs. Flying Saucers and Seventh Voyage of Sinbad. ~ Hal Erickson, Rovi

Critic Reviews for It Came from Beneath the Sea

Harryhausen's many-armed gargantuan (for budgetary reasons, it actually only possessed six appendages) is easily the best reason to watch this production.

Given the number of movies like this that DIDN'T pay off with such a top-notch monster, it is easier to forgive the various narrative, cinematic, and psychological failings.

Harryhausen wasn't yet on top of his game, but the special effects still were the feeble film's best feature.

Of course, in perspective it's all a fun kind of bad and any Cahiers du Cinema critique dissolves on contact.

Audience Reviews for It Came from Beneath the Sea

The second big monster from the deep for Harryhausen and again its all down to those pesky atomic bomb tests the US keep doing. This time they have disturbed a gigantic octopus from the Mindanao Deep, but not only have they upset this big boy, they have also made him radioactive which makes it very hard to catch his usual meals. So up he comes to the surface to chow down on lots of yummy humans in and on board various vessels, canned food. So if you just scratch beneath the surface (no pun intended) you will easily see the similarity with his previous film 'The Beast from 20,000 Fathoms'. Cut down this is simply the exact same film with a slight change in story and of course a different beastie. Instead of a mighty lizard we have a mighty octopus. To be really brutally honest I found this film a tad on the dull side, I'll say this again and again but these films are all about the creatures and unfortunately this film doesn't have as much. Now I'm not saying its a bad film, its just not as thrilling, there is a lot of dialog revolving around trying to find out what is causing the damage and deaths, and then how to kill it, plus there's a fair bit of dull romance too. So overall we don't get tonnes of monster mashing I'm afraid. On the plus side this enormous cephalopod looks terrific! possibly even better than the lizard from '20,000', its actually quite realistic too. I love the way the tentacles reach out from the depths and crane over bridges, ports, buildings etc...slowly slithering their way along feeling for food. The Golden Gate Bridge sequence is still awesome to see, watching this sea monster coil itself around the bridge stanchion. Love how these films always have a few good looking heroic male characters that take control. One old guy who is the brains behind all the plans and just one attractive female to keep things exciting for the boys during the action hehe. Its all so chauvinistic yet curiously charming and amusing at the same time. Another fun thing to point out in these old films is the large amount of narration, the way it explains the simple plot clearly because they thought people wouldn't understand haha hmm maybe we should have more of that these days. The film comes to life towards the end as we see the Octopus strike. The use of flamethrowers to push the monster back into the sea is another really well created sequence. Up to then I can't deny its a bit of a struggle in places leaving you gagging for some in your face Harryhausen effects, but overall its still classic stuff. Ironic that weapons of mass destruction always create these ferocious problems yet they still resort to using them to attempt to solve the problem. Its all very nautical yet not a salty seadog in sight. 6.5/10

Standard 50's B movie trash that is complete with cheesy dialogue, unnecessary narration, wacky science, military stock-footage, and stiff acting. The only reason to see this movie is for the Ray Harryhausen giant octopus, but even then the giant octopus is only in the movie for a total of ten minutes.

Here is the last film in the Ray Harryhausen boxed set. It Came From Beneath the Sea contains enough boring dialogue, character flaws and bad acting to be crammed into ten other bad films. Yeah I guess I'm being a bit cynical, but these films really do not hold up on any level. Like the rest, their effects are impressive for their time, but don't hold up because of the lack of magic in the other areas. I burst out laughing when the lead female stands up for herself in a very feministic way, then just screams her head off when the monster pops up out of nowhere. Talk about your character flaws. Anyway, like I said, this wasn't good, and neither are most of the films Harryhausen worked on during this era. Trash B movies to the core.

The title says it all, this movie is about a giant sea creature. They have to stop it. This is probably my favourite giant monster movie.

It Came from Beneath the Sea Quotes