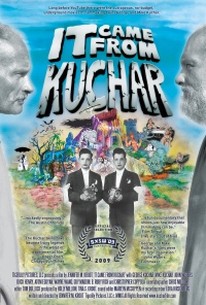 It Came from Kuchar Photos

"It Came From Kuchar" is a film about the legendary, underground filmmaking twins, George and Mike Kuchar. As kids in the 1950s, George and Mike began making no-budget 8mm epics in their Bronx neighborhood, starring friends and family. In the 1960s the Kuchars became part of Warhol's New York, underground film scene. The Kuchar brother's films have inspired many prominent filmmakers, including John Waters, Buck Henry, Atom Egoyan, Guy Maddin and Wayne Wang.

Critic Reviews for It Came from Kuchar

A lively little doc that might just do for you what it did for me -- provide a welcome introduction and an amusing education.

Kroot's film, with assists from interview subjects like John Waters, Buck Henry, Wayne Wang, Guy Maddin and Atom Egoyan, makes a compelling case not so much for the Kuchars' movies, exactly, as for their independent spirit.

The movie makes the case that the best American filmmakers may be the uncelebrated ones who helplessly turn life into art simply as a means to get out of bed every day.

In any case, the documentary is interesting as a human story. And anyone who loves the Kuchar brothers' films or underground cinema in general will take extra pleasure in it.

The portrait that emerges is affectionate and fascinating. The brothers themselves are un-self-consciously talkative, unassumingly odd and frequently very funny.

You don't have to have ever seen any of their movies to enjoy It Came From Kuchar, directed by one of George's former students, Jennifer M. Kroot. But you'll probably want to catch up with their work afterward.

A love letter from Kroot to the Kuchars that works both as an introduction to their work and an appreciation for the sophisticated Kuchar fan.

It's ironic that director Jennifer M. Kroot was able to make a good movie about twin brothers George and Mike Kuchar, the low-budget underground auteurs who have been cranking out terrible low-budget genre films since the early 1960s

For a documentary about D-movie mavens, It Came from Kuchar is expertly edited, and it serves as both a comprehensive archival overview for diehard fans and a thorough introduction for beginners.

Singular for the way it takes audiences where they never would have otherwise visited: the living rooms of the eccentric and effortlessly hilarious filmmaking Kuchar brothers.

The world's cinema culture needs eccentric visionaries like George and Mike Kuchar, twin brothers from the Bronx with billionaire imaginations and $1.98 resources.

Filmmakers George and Mike Kuchar get their due--and then some--in this breezy, entertaining overview of the brothers' work.

Audience Reviews for It Came from Kuchar

Holly crazy eyebrows Batman, how have I not heard of Kuchar before?

It Came from Kuchar Quotes