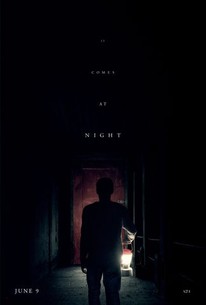 Critics Consensus: It Comes at Night makes lethally effective use of its bare-bones trappings while proving once again that what's left unseen can be just as horrifying as anything on the screen.

Critics Consensus: It Comes at Night makes lethally effective use of its bare-bones trappings while proving once again that what's left unseen can be just as horrifying as anything on the screen.

Critic Consensus: It Comes at Night makes lethally effective use of its bare-bones trappings while proving once again that what's left unseen can be just as horrifying as anything on the screen.

It Comes At Night Videos

It Comes At Night Photos

Imagine the end of the world. Now imagine something worse. Award-winning filmmaker Trey Edward Shults follows his incredible debut feature KRISHA with IT COMES AT NIGHT, a horror film following a man (Joel Edgerton) as he learns that the evil stalking his family home may be only a prelude to horrors that come from within. Secure within a desolate home as an unnatural threat terrorizes the world, the tenuous domestic order he has established with his wife and son is put to the ultimate test with the arrival of a desperate young family seeking refuge. Despite the best intentions of both families, paranoia and mistrust boil over as the horrors outside creep ever-closer, awakening something hidden and monstrous within him as he learns that the protection of his family comes at the cost of his soul.

Critic Reviews for It Comes At Night

It Comes at Night is a powerful, slow-burning horror, a distressing and nihilistic examination of human nature that lingers in the mind long after the shocking denouement.

The movie has its flaws. But one of Shults's main triumphs is to get us to believe in the danger of the outside world as fiercely as his characters do.

Shults's adoption of a more vicious mode sharpens his already discomfiting take on families in states of extreme duress in his debut feature Krisha.

It's a simple exercise in terror that avoids too much explicit violence, and a quietly impressive little movie.

The characters' behaviour rings true, the tension is strong and the oily darkness of it all looks good.

The "It" of the title refers to the contagious disease that has devastated the outside world (a world that, like much in this beautifully minimalist film, we never see), but it also denotes something even more virulent and destructive: human fear.

An immaculately crafted film from a director who is at the top of his game, but the script is missing a few key parts to make it something truly special.

A compact thriller that mostly succeeds until an ending that doesn't feel ambiguous as much as it feels unfocused and unfinished.

Writer/director Trey Edward Shults makes the most of the least, relying on shadow and sound to terrify.

One of the most tonally cohesive and claustrophobic films of the year...

Effective as both a deliberately paced allegory with a sense of dread throughout, as well as a horror movie you can take at face value that's full of solid jump scares.

This isn't to say that It Comes At Night is a bad film, but it is a disappointing one.

Audience Reviews for It Comes At Night

A combination of nerve-racking sound, uncertainty and paranoia builds up what seems to be a grounded take on a pandemic-like survival. It Comes at Night is able to use the aspect of internal horrors and panic to develop a sense of unnerving suspense that is for the most part effective especially in the third act. 4/1/5

For anyone who has ever seen The Walking Dead, this film won't be very original in terms of how it depicts paranoia and distrust between strangers in a post-apocalyptic scenario, but it compensates with a tense and unsettling mystery that keeps us on the edge of our seats.

Like an earlier harbinger of the potential pitfalls of mother! marketing your movie as something it's not, the vaguely apocalyptic drama It Comes at Night is a paranoid thriller that is so bleak and absent resolution that you'll wonder why anyone bothered. It's not a bad film, and actually writer/director Trey Edward Shults has a knowing command on how to raise and develop tension with very precise camerawork and visual composition. The slow inspection of offscreen noise is still ready to build tension. The story has promise. Joel Edgerton is the father of a family trying to eek out an existence after the spreading of a deadly plague. He has a strict series of guidelines to protect his family members and keep them secure. This is put into jeopardy when he meets another family and invites them into his home. The rest of the film follows the slow dismantling of trust and the rise in suspicion and how it ruins both families. That's essentially the movie. There is no "it" of the It Comes at Night. The post-apocalyptic element is at best tertiary to the plot, and the titular warning seems odd considering sickness can arrive at all hours. I think the reason audiences seemed to froth wildly at the mouth over this movie is due to its grossly misleading marketing. I re-watched the trailer and all of the supernatural imagery, which is extensively highlighted, is from dream sequences, and one dream sequence within a dream sequence. There's a moment where the grandfather's dog runs off into the woods at barks at an unseen force. You hear strange sounds but you never see anything, and this becomes just another unresolved, underdeveloped element. This is more a Twilight Zone parable about the destructive nature of man. The look of the film is moody, the performances are good, but I felt underwhelmed by the end and questioned the point of it all. It Comes at Night is okay. I can't see what people loved and I can't see what people hated, though I can see more of the aversion. Nate's Grade: C+

The horror genre is subjective with any film that it releases, plain and simple. There will never be a horror film that 100% of its audience enjoys. Some viewers will either be chuckling, completely invested, or hoping for something else entirely. Yet again, It Comes At Night will probably do just that for the majority of its screenings. That being said, this is one of the best horror films of the last few years and quite possibly the best film in general that I've been able to see in all of 2017. Recently, with films like Lights Out, Don't Breathe, or The Witch, the horror/thriller genre has been utilizing the proper tropes and delivering some pretty effective films. It Comes At Night is just another one to add to the list of recent greats, and here is why. The style of film and television hasn't ever been the same, but with the wave of great television shows over the last decade or so, the difference is not so far off anymore. The best way to describe this film is to call it the very best of The Walking Dead. Beginning with an outbreak of some kind that has already began to spread, we are dropped into the lives of a family, lead by Paul (Joel Edgerton). As they are living as peacefully as they can out in the woods, another man barges into their lives unintentionally. Wishing to keep his wife and son safe, they form a bond and begin to trust one another. The tension between who is keeping secrets and lies begins to unfold and this film deals with those elements wonderfully. If you're looking for a terrifying horror film or wish to have an incredibly intense thriller, you've come to the wrong place. Although the trailers for It Comes At Night shroud the film in secrecy, making you grasp for answers, this is just a human story from beginning to end. It's two families pitted against each other, both in need of the same things, supplies and survival. From start to finish, this is a tension-filled character study and nothing more. Sure, there are some truly terrifying images spliced into the film and certain moments definitely made me uneasy, but I found myself completely sucked into this world and wondering who was truly good and bad deep down. Another thing this film fails to do is reveal itself for what it truly is, which is what I found to be the best aspect of the entire movie. As mentioned above, the best part about this movie is that it doesn't take any time to deliver long exposition sequences as to what it going on in the outside world around them. Left to the imagination of its audience, due to the fact that there are so many films and television shows that probably already have similar explanations, It Comes At Night is the type of film that cares about its characters first and foremost. The plot at hand is among these six people and the story never strays away from that for a second. There are dream sequences and side issues that happen in order to keep the audience engaged, but this an incredibly focussed little thriller. Some people may called this a zombie film of sorts and they wouldn't be wrong in the slightest, but the fact that it's kept ambiguous was terrific. Reflecting on this film, there really aren't any glaring issues throughout this movie, due to the fact that it's just a slice of life in a post-apocalyptic world. The tension is very present, the conclusion is gutsy and satisfying, and I cared about each and every character. What put It Comes At Night over the edge for me, was the fact that it felt real. Without the mention of otherworldly things (even though you knew the implications of that), this film makes itself grounded in reality and you truly believe that these two families are fighting for their survival. There are a few unanswered elements and there are a few predictable scenes, but if you feel like investing yourself in a thrilling drama, then look no further than It Comes At Night, because it deserves your attention. I loved watching this movie.

It Comes At Night Quotes