It Conquered the World1956 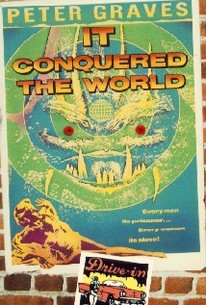 It Conquered the World Photos

Though Roger Corman was still new to sci-fi in 1956, he made up for lost time with the above-average quickie It Conquered the World. Peter Graves heads the cast as Paul Nelson, who suspects that his best friend, eccentric genius Tom Anderson (Lee Van Cleef), is up to no good. Sure enough, Tom has contacted the denizens of the planet Venus, who hope to exploit Tom's weak nature in order to take over the world. Before long, the Venusians have taken over the minds and bodies of virtually all of Tom's friends and loved ones. It is up to Paul and a handful of un-brainwashed earthlings to halt this subversive alien invasion. Scripted by Charles Griffith (of Little Shop of Horrors fame), It Conquered the World is a thinly disguised attack on totalitarianism, from both the Left and Right. Corman regulars Beverly Garland, Dick Miller and Jonathan Haze make brief but significant appearances. The film represented first "monster" creation of Paul Blaisdel, whose Venusian leader looks like a surly carrot. It Conquered the World was remade--badly--as Zontar, the Thing from Venus (1968).

Charles B. Griffith
as Pete Shelton

Paul Blaisdell
as Visitor from Venus

Critic Reviews for It Conquered the World

Audience Reviews for It Conquered the World

A Body Snatcher rip off with good intentions, but the campiness cannot redeem the film to make it more enjoyable.

One of the best examples of the drastic disconnect between what a film is attempting to convey and what it actually manages... an essential characteristic of B-Films. There is supposed to be something of earth-shattering significance occurring, but the most people can express is mild concern... at best. The main joy that can be extracted from this film lies in that fundamental flaw... as well as one of the most absurd monster-designs of the 1950's. Still, "It Conquered the World" isn't bad enough to be utterly fun, yet still seems "serious" enough, in its ham-fisted but depressing defense of humankind, to be considered as an actual sci-fi movie rather than a B-Film. As such, it is best saved for a time when you seriously have nothing else to watch.

It Conquered the World Quotes