It Happened in Brooklyn1947 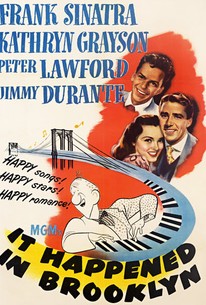 It Happened in Brooklyn Photos

It Happened in Brooklyn was released at a time when the mere mention of the eponymous New York borough elicited loud laughter and extended applause. Frank Sinatra stars as ex-GI Danny Webson Miller, who makes a sentimental journey to the Brooklyn neighborhood where he grew up. Danny moves in with an old pal, high school janitor Nick Lombardi (Jimmy Durante), then inaugurates a romance with music teacher Anne Fielding. He also resolves to turn stuffy uptowner Jamie Shelgrave (Peter Lawford) into a true "son of Flatbush." The plot thickens when Jamie himself falls for Anne and when Danny tries to secure a scholarship for Anne's prize pupil, Nick's granddaughter Rae (Marcy McGuire). Since MGM was giving Peter Lawford the big build-up, it is Jamie who ultimately wins Anne's heart, but Danny finds consolation with an old "goil friend" (Gloria Grahame). Musical highlights include Frank Sinatra and Jimmy Durante's imitations of one another in "The Song's Gotta Come From the Heart" and Sinatra's rendition of the standard-to-be "Time After Time".

Mitchell Lewis
as Printer
View All

Critic Reviews for It Happened in Brooklyn

Aside from an overdose of jokes about Brooklyn, everything about the picture is not only unobjectionable but, in a modest way, definitely enjoyable.

The film's most interesting angle: Sinatra's bloom into a carefree, light-comedy personality.

Audience Reviews for It Happened in Brooklyn

Minor MGM musical with the usual lightweight framework providing the stars a chance to break out in song. If you enjoy that type of movie than this will be a pleasant diversion especially since it introduced the beautiful ballad *Time After Time" which is performed in various versions several times throughout the film. Sinatra and Grayson are in fine voice and Durante his usual wisecracking somewhat befuddled self. Unfortunately Gloria Grahame although prominently billed is in and out of the picture after the first five minutes.

It Happened in Brooklyn Quotes